Home › Uncategorized › Of Geysers and travelers…

Of Geysers and travelers…

For the Day of the Stamp 2017, Iceland celebrates 250 Years of Foreign Scientific Expeditions and Travelers to Iceland with a minisheet featuring an engraving by I. Thortwaithe after a drawing by I.Ibbetson.

This beautiful minisheet is designed by Hlynur Ólafsson and printed in offset litho by the Lowe Martin Group.

It will be issued on September 14th, along with six other stamps in four different series. 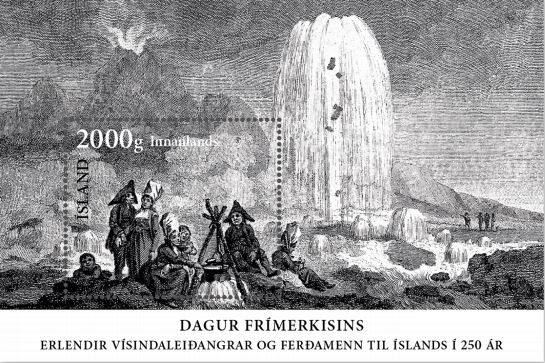 654A – Day of the Stamp. Iceland opens to the world: 250 years of foreign expeditions and traveling to Iceland

The drawing represents a group of travelers – one can assume by the men’s clothing that they are probably foreign – preparing a meal on an open fire in front of a typically Icelandic landscape of spouting geysers.

The Great Geysir is a geyser situated in Haukadalur in southwestern Iceland. For centuries, the Great Geysir’s eruptions ejected boiling water from 70 to 120 metres in the air, but its activity has been greatly affected by the frequent earthquakes in the area, and it now only erupts very infrequently.
The English word geyser, used to signify a periodically spouting hot spring, is actually derived from the Great Geysir’s name, whereas the Icelandic word geysir itself comes from the verb “að gjósa”, “to erupt/gush”.

50 metres south of Geysir, its “little brother” Strokkur (the Churn), also a spouting geyser, still erupts to heights of up to 30 metres every few minutes!
Its activity has also been affected by earthquakes, although to a lesser extent than the Great Geysir’s. Strokkur is the only spouting geyser in Europe!

If you can’t make it to Iceland yourself, don’t worry! This Europa stamp from 2012 featuring Strokkur is still available on our website 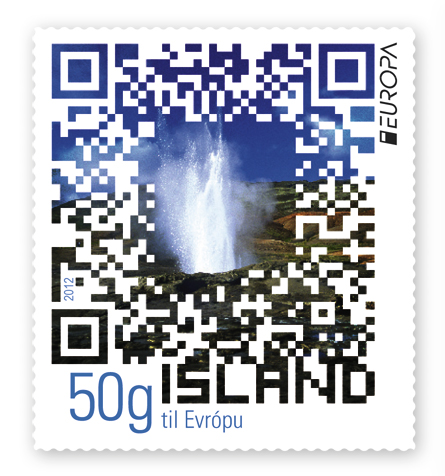