Castles and forts to feature on latest stamps from Jersey Post 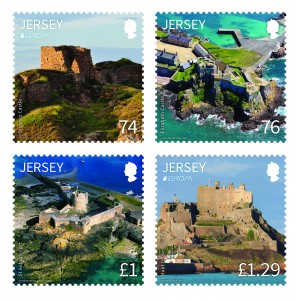 A new set of stamps featuring four of Jersey’s most impressive castles and forts will be released by Jersey Post on 2 March as part of the 2017 Europa stamp issue.

Every year, European postal administrations are given a stamp issue title to interpret and illustrate by PostEurop, the trade association that has been representing European postal operators since 1993.

“The idea behind the joint stamp issue is to build awareness of each other’s culture and history,” explains James Dann, Philatelic Researcher at Jersey Post. “This year the subject is Castles, and it’s given us the perfect opportunity to showcase Jersey’s rich and varied heritage.”

Featured across the four stamps are: Grosnez Castle, built in the 14th century to provide refuge during French raids; 16th century Elizabeth Castle, set on a rocky islet half a mile out to sea; St Aubin’s Fort, designed to delay approaching enemies with cannon fire and the magnificent Mont Orgueil, which towers above Gorey Harbour in the east of the Island and was built to protect Jersey from invasion by the French.

“These iconic landmarks are frequently photographed by both islanders and visitors,” continues James.

“With this in mind, we have chosen images with interesting and unusual perspectives, including an aerial view of Elizabeth Castle and a lesser photographed angle of Mont Orgueil.” 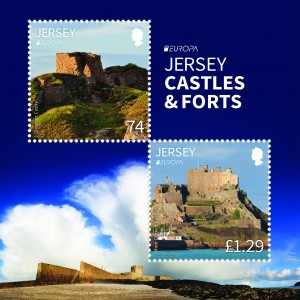 The Europa logo appears on both the Grosnez Castle (74p) and Mont Orgueil Castle (£1.29) stamps and the two Europa stamps have also been presented together in a Souvenir Miniature Sheet.

Jersey Post’s Castle and Forts stamps will be available to buy from all branches of Jersey Post from 2 March 2017. Philatelic stamp products such as sets of stamps, Souvenir Miniature Sheets, First Day Covers and Presentation Packs will be available from the Jersey post offices at Broad Street, St Helier and Rue Des Pres, St Saviour on issue day and can be ordered now at www.jerseystamps.com or by telephoning the Jersey Philatelic Bureau on: 00 44 (0)1534 516320.