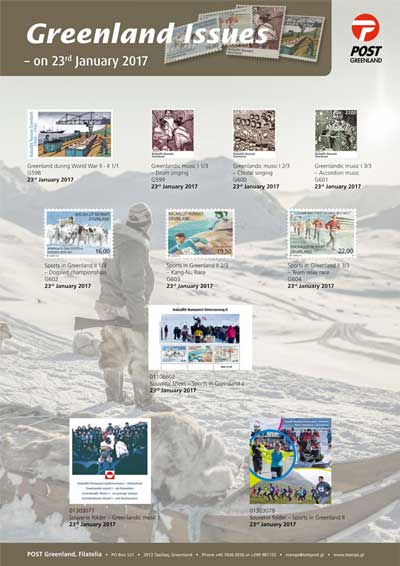 Carrying on the permanent tradition, the stamps in 2017 will be divided into three issues: one in January, one in May, and one in October. We will begin with the seven stamps that are issued today.

Greenland during the Second World War, Greenlandic music and Sports in Greenland.

”Greenland during the Second World War” is the title of our new big series, which began three months ago. Naja Rosing-Asvid is the woman, who will show us the world war from the perspective of the Greenlandic people by means of ten stamp images issued until 2020. We have come to the fourth stamp in the series, which is issued in normal sheets and printed in combined offset and laser engraving. The engraving of the entire series is created by the legendary Martin Mörck.

Music plays an important part in Greenland’s culture and history. Every year, 10-15 CDs with Greenlandic music are released. The bestselling of these are issued in a number of 5,000. copies. Rather impressing in at country of only 56,000 inhabitants. It is therefore natural that we dedicate a whole series to Greenlandic music. Camilla Nielsen, who will be known to several of our collectors from earlier stamps, has created a total of six beautiful images reflecting the Greenlandic music through six different eras. The first tree stamps are looking at Greenlandic music over a long time period from drum singing to accordion music. The stamps are issued in normal sheets and printed in offset.

Since 1992, the multi-faceted artist Miki Jacobsen has enriched us with his stamp art. Last year, we issued the three first stamps in the series ”Sports in Greenland” created by Miki. Today, the 23rd of January, we round off the sports series with the last three stamps illustrating another three big annual sporting events in Greenland. The printing method is offset, and the stamps are issued in both normal sheets and souvenir sheets.

You will find more information about the new stamps in POST Greenland collector’s magazine, Greenland Collector, which can be downloaded as a PDF document in Danish, English and German on www.stamps.gl.

Download the pictures fo the new stamps here in PDF or zip.

Subscribe to Greenland Philatelitic newsletter and stay updated on the latest news, issues of new stamps and our products, as well as various competitions.