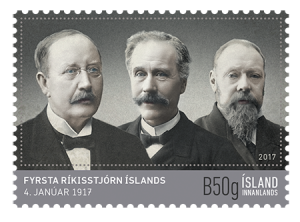 On New Year’s Day 1917,  a proposition concerning an increase in the number of ministers in the Icelandic government was cabled to the Danish king who ratified it the next day.

Until that time, Iceland had had only one minister, Hannes Hafsteinn, but now they were three: Jón Magnússon, Prime Minister and Minister of Justice, Sigurður Jónsson, Minister of Labour and Björn Kristjánsson Minister of Finance. Sigurður Eggerz took office as Finance Minister later in 1917.

Since 1909, proposals of adding ministers to the government had been put forward and in 1913, Parliament approved amending the number of ministers. Changes were not made until January 4th, 1917 and the first Icelandic government was formed and started working. The new ministers were appointed in charge of three Government offices, later termed ministries. Each minister was empowered to rule on matters of his own ministry without the intervention of his co-ministers. The Prime Minister conducted regular meetings, where governmental matters were discussed. Meetings between the king and the ministers were known as the State Council.

In accordance with Iceland’s sovereignty in 1918, the formation of the Icelandic State Council was decided by royal decree on May 28th, 1919. After the establishment of the Republic on June 17th, 1944, the President of Iceland replaced the King of Denmark as head of state. 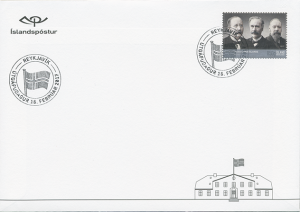 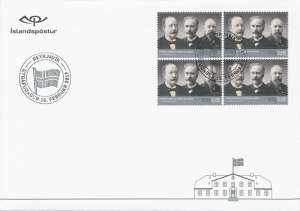 These stamps and first day covers will be issued by Iceland Post Postphil on  16 February 2017 and will soon be available on our webstore.