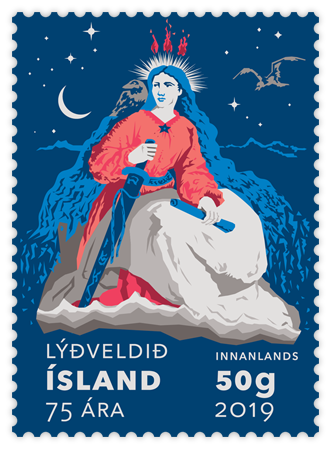 On 1 December 1918, the Icelandic state flag (Ríkisfáni) was hoisted for the first time in front of the Government Offices in Reykjavík. A hundred years later, Iceland celebrates 100 years of sovereignty.

The process leading to Iceland’s sovereignty and later independance was a long pursuit. The independance movement partly originated within the Icelandic student intelligentsia in Denmark.

Four young Icelandic intellectuals who became known as the  Fjölnismenn were particularly instrumental in reviving the national consciousness in Iceland via the publication of the journal Fjölnir, making important contributions to the revival of Icelandic as a written language and influencing the cultural and political milieu in Iceland, thus giving impetus to the Icelandic independence movement. The Icelandic poet Jónas Hallgrímsson was one of the Fjölnismenn –  his contribution to the preservation of the Icelandic language was such that every year since 1996, the Day of the Icelandic Language is celebrated on Jónas’s birthday, 16th November!

Several representative figures became rallying symbols during the pre-sovereignty period and later during the struggle for independence.

One of these figures is the Lady of the Mountain, (Fjallkonan in Icelandic) the personification of Iceland as a woman. The personification of a nation as a woman was relatively widespread in eighteenth- and nineteenth-century Europe and the Lady of the Mountain, who had been a popular figure in Icelandic poetry since the first decade of the nineteenth century, became an important symbol in republican times.

In 1866, German painter Johann Baptist Zwecker drew what was to become one of the most famous representations of Fjallkonan, thus described: 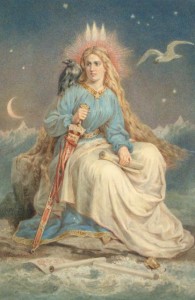 The woman is a personification of Iceland, thus she has a crown of ice on her head, from which fires erupt. On her shoulder is the raven, Iceland’s most characteristic bird, Óðinn’s ancient friend and the favourite of poets, a great and knowledgeable carrier of news. Over the seas flutters a seagull, but across the surf of time and history are borne rune-staves to the land and up into the embrace of the woman, and she has picked one of them up. This is intended as a symbol of our land of literature and history. It is night, with a starry sky and the moon up. Behind are mountains, moonlight on the ridges.

Zwecker’s painting influenced Icelandic poet Benedikt Gröndal, who used it as inspiration when he designed a memorial card for the 1874 celebrations at Þingvellir, the national festival commemorating 1000 years of settlement in Iceland. 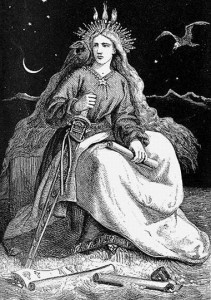 Gröndal’s Fjallkonan, design for a memorial card for the 1874 celebrations in Þingvellir

On 7th February 2019, Postphil /Iceland Post will release a stamp for the 75th anniversary of the Republic of Iceland.

The stamp features a modernized version of Benedikt Gröndal’s drawing for the commemorative card, in which the colours refer to the national flag. It was designed by Hörður Lárusson  who has been designing stamps for Postphil regularly over the years. 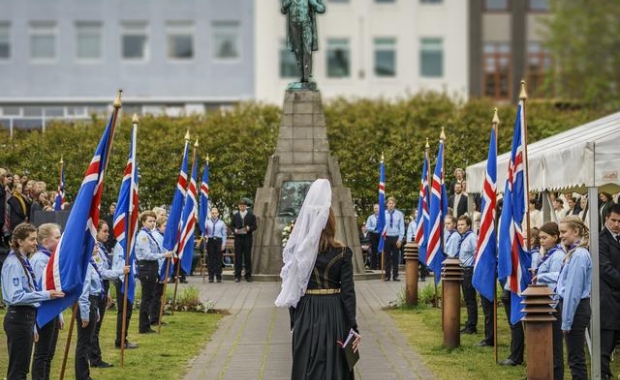 We’ll keep you posted when the issue becomes available!  In the meantime, you can check out our facebook page for information 🙂