Home › Uncategorized › Year of the Pig celebrated on Jersey stamps

Year of the Pig celebrated on Jersey stamps 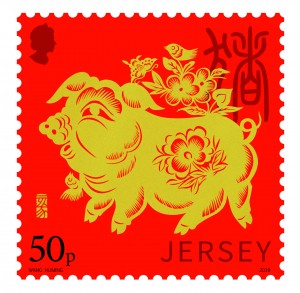 The Year of the Pig is the subject of Jersey Post’s first stamp issue of 2019, to be released on Friday 4 January. Illustrated by Wang Huming in Beijing, China, the issue comprises a single stamp and a Miniature Sheet and forms the fourth part in Jersey Post’s series celebrating the Lunar New Year, preceded by Year of the Dog (2018), Year of the Rooster (2017) and Year of the Monkey (2016).

“The Lunar New Year is the most important celebration in the Chinese calendar and is celebrated by Chinese and ethnic communities around the world,” explains Melanie Gouzinis, Head of Philatelic at Jersey Post. “The Chinese animal zodiac is a repeating cycle of twelve years; each of the twelve years is represented by an animal and 2019 is the year of the pig.”

In Chinese culture, pigs represent good luck and fortune and are thought to attract wealth. People born in the year of the pig are said to be friendly and popular although they can also be gullible and judgmental.

“Once again, we’ve been extremely fortunate to work with Wang Huming on this stamp issue,” continues Melanie. “The Deputy Chief Designer of the Postage Stamp Printing Bureau of China Post, Wang Huming has created the designs for each of the issues in Jersey Post’s Lunar New Year series and has been continuously elected as the most loved stamp designer by Chinese collectors in recent years.

The design Wang Huming has created for the 50p stamp shows the brown Earth pig and in the background is the Chinese word for pig. The Miniature Sheet illustration shows three piglets playing with their mother and on the border, a narrative in Chinese characters explains some of the background of the Chinese zodiac followed by information regarding the Year of the Pig. The stamp and the Miniature Sheet both feature a gold metallic ink and varnish. 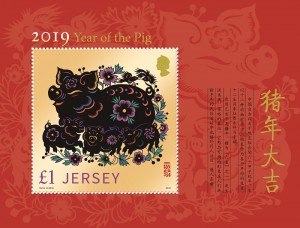 Jersey Post’s Year of the Pig stamps will be available to buy from all branches of Jersey Post from 4 January 2019. Philatelic stamp products such as Miniature Sheets, First Day Covers and Presentation Packs will be available from the Jersey post offices at Broad Street, St Helier and Rue Des Pres, St Saviour on issue day and can be ordered now at www.jerseystamps.com or by telephoning the Jersey Philatelic Bureau on: 00 44 (0)1534 616717