Her Majesty’s Government of Gibraltar and the Gibraltar Philatelic Bureau in close cooperation with Maverick Advertising & Design Ltd have issued a set of 5 stamps commemorating the 75th Anniversary of the Evacuation of the civilian population of Gibraltar.

The £2 stamp has set a new philatelic record for ‘Most words on a postage stamp’ with a total of 2,183 legible words! Thanks to an innovative micro printing technique and working with one of the leading international security printers has made it possible for Gibraltar stamps to once again place our country and on this occasion one of our most important historic anniversaries on the worldwide map.

The 2183 words have been fitted inside a 40 x 32mm stamp and explain in detail the history of the evacuation of the civilian population of Gibraltar during World War II.  The stamps have been designed by local artist Mr Stephen Perera and feature historic photographs from the local archives. The world record breaking £2.00 stamp features the Gibraltar Evacuees Memorial Sculpture situated at Waterport Road 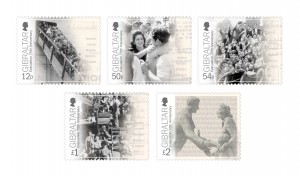 During the Second World War there was a fear that if Nazi Germany and its allies took Gibraltar and the strait, there would have been catastrophic consequences. Churchill himself described ‘Operation Torch’, the attack on French North Africa, as the ‘Hinge of Fate’. And to accommodate the influx of military personnel required to reinforce the Rock, it was decided that 16,000 civilians who were not deemed essential to its defense, should be evacuated.

2014 marks the 75th anniversary of this mass-migration. Within a matter of weeks over 70% of the total population of Gibraltar was evacuated to French Morocco. Gibraltar’s women, children, elderly and infirm, were torn apart from husbands, fathers, and sons in a time of intense danger. They accepted that hardship with immense courage and as an act of duty and loyalty to Britain.

The story of Gibraltar’s evacuation is one of the few untold stories of the Second World War. This commemorative stamp issue serves to remember the hardships endured by so many Gibraltarians in this time of conflict and we hope it will encourage you to celebrate the ‘Evacuation Generation’, while we still can. To find out more about the evacuation story please visit www.gibraltar75years.com

The stamps were officially released on Gibraltar’s National Day (10th September 2014) and is  available for purchase on  www.gibralar-stamps.com