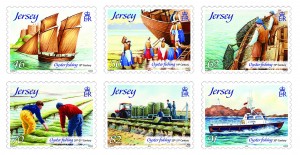 The colourful history of Jersey’s oyster fishing industry features on a new set of stamps to be issued by Jersey Post on 9 October 2014. The stamps, painted by local artist Nick Parlett, depict scenes both past and present, of this important aspect of the Island’s great heritage.

Speaking on behalf of Jersey Post, Philatelic Manager Melanie Gouzinis explains: “We are so fortunate to have on our doorstep a wealth of interesting stories from our island’s history. It is always a pleasure to produce stamps with the input of local artists and experts and, in this case, Doug Ford of Jersey Heritage helped us enormously by providing us with a fascinating account of the industry.”

The stamps are accompanied by a Prestige Booklet which, alongside panes of stamps, includes detailed text written by Mr Ford and additional illustrations by Mr Parlett. According to Mr Ford: “The Jersey oyster fisheries played an important role in the development of the Island’s economic prosperity in the years following the Napoleonic Wars. Although the oyster fisheries had existed for centuries, it was during this period that they had the greatest impact on the Island. In 1810, the British government actively encouraged fishermen to increase production as part of the war effort; English fishermen began to move into the area and soon, a large-scale trade developed providing accounts of violent clashes between rival fishermen, government intervention, and typhoid along the way.”

The method of supplying oysters has changed greatly since these early days; most are farmed in the Royal Bay of Grouville benefitting from the daily natural filtering effect of Jersey’s unique tide and crystal clear water. Three main suppliers currently operate in Jersey exporting over 550 tons of oysters per year. 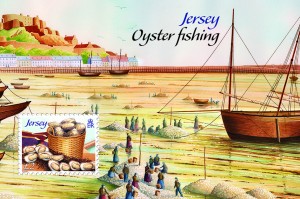 The stamps will be available to buy from all branches of Jersey Post from 9 October 2014. Philatelic stamp products such as sets, Miniature Sheets, First Day Covers, Presentation Packs and Booklets will be available from the main post office at Broad Street, St Helier, Jersey, on issue day and can be ordered now at: www.jerseystamps.com or by phoning the Jersey Philatelic Bureau on: 00 44 (0)1534 616320.