Guernsey Post announces that it will release stamp products to celebrate the Year of the Rabbit, which is the 10th set in its Chinese New Year series. The stamps have been created by designer Chrissy Lau, who has worked on Guernsey’s entire series (issue date: 5 January 2023).

According to the Chinese zodiac, Chinese New Year, which is the Year of the Rabbit in 2023, falls on Sunday 22 January with celebrations lasting for 15 days in China and other Asian countries.

Bridget Yabsley, head of philatelic at Guernsey Post said: – “We are delighted to celebrate Lunar New Year with our Year of the Rabbit stamps. Artist Chrissy Lau has chosen symbolically significant colours associated with Chinese culture. The use of red represents good fortune and joy and is often used in celebrations, particularly the Lunar New Year, whilst the gold detailing reflects wealth, prosperity, and happiness.”

56 pence value: The rabbit holds an ‘ang bao’ red packet which is filled with money and given to children during the Chinese New Year festivities. The rabbit’s body is decorated with the plum blossom flower symbolising hope, perseverance and beauty in Chinese culture.

79 pence value: The rabbit holds a carrot, his body decorated with an auspicious cloud pattern to symbolise ‘good luck’: the Chinese word for cloud is pronounced the same was as yun meaning ‘luck’ or ‘fortune’.

87 pence value: The rabbit wears a longevity knot decoration, often seen during the festivities, which acts as a good luck charm and is intended to bless him with a long life. The rabbit’s body is decorated with a scroll pattern commonly seen on Chinese ceramics.

£1.21 value: A rabbit runs whilst wearing a decorative coin necklace. These charms are displayed during Lunar New Year festivities in a bid to attract wealth and fortune. The rabbit is decorated with a peony pattern symbolising wealth, honour and peace.

£1.39 value: the mother rabbits hugs her baby in a protective manner, her body  decorated with a chrysanthemum pattern which is said to symbolise a long life.

£1.50 value: Twin rabbits display their gold ingot, coins, and red packets, which are said to attract wealth and good fortune during the festivities. The rabbits’ bodies are decorated with Chinese cabbage ‘cai’, symbolising wealth and prosperity.

In addition to the six stamps, the souvenir sheet product depicts a rabbit holding a lantern with the Chinese word ‘fu’, meaning fortune, which are often displayed to bring good luck during the festivities. The rabbit’s body is decorated with the family rose pattern, which is often seen on Chinese ceramics. 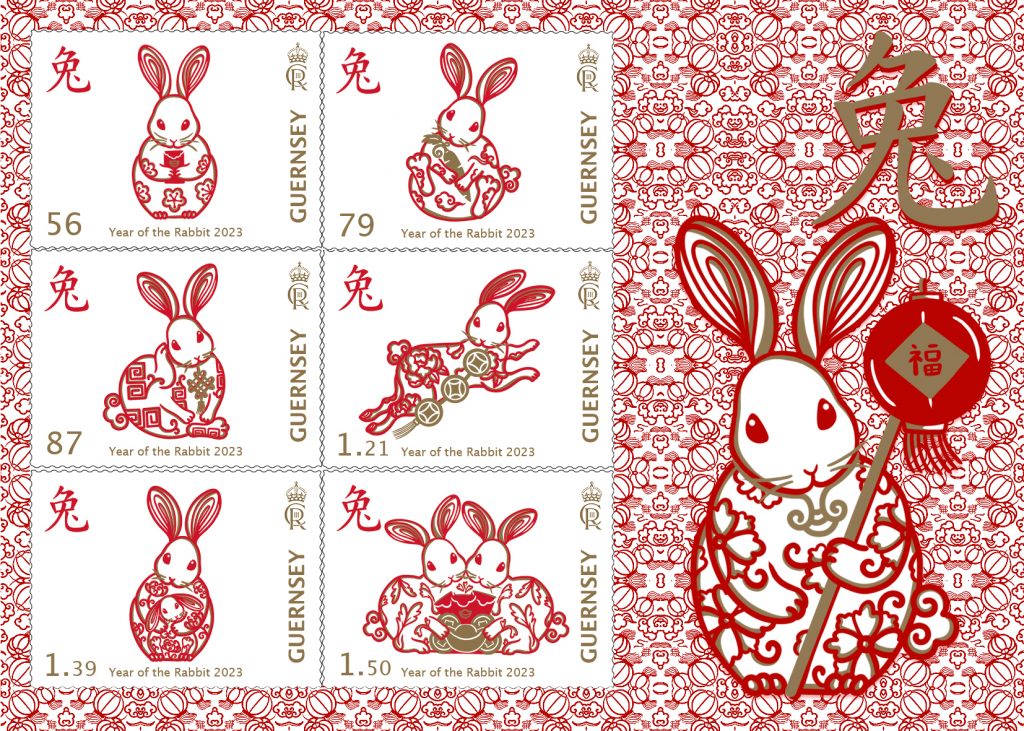