Guernsey Post’s philatelic bureau is delighted to announce that it will celebrate the life of Her Majesty Queen Elizabeth II with the release of two se-tenant stamps depicting photographs of The Queen, alongside monuments and places Her Majesty visited whilst in the Bailiwick of Guernsey. The stamps, along with a miniature sheet, will be issued on 6 February 2023, 71 years after The Queen acceded to the throne.

Bridget Yabsley, head of philatelic at Guernsey Post, said: – “Her Majesty Queen Elizabeth II ruled for longer than any other monarch in British history. She will be remembered by many for her unwavering sense of duty and devotion to a life of service.

“On her first visit to the Channel Islands in 1949, whilst still a Princess, Elizabeth, accompanied by her husband the Duke of Edinburgh, arrived in Alderney. She promised to revisit in the years that followed and over the decades Her Majesty returned to the Bailiwick a further five times.

“We are honoured to celebrate the incredible life of Her Majesty Queen Elizabeth II with our commemorative stamps,” Bridget added.

1978: Her Majesty Queen Elizabeth II and Prince Philip visited Guernsey and after a formal lunch at the Royal Hotel they travelled to St Peter’s village and met the crowds who had gathered to see them.

2001: The Queen and Prince Philip toured the Bailiwick for a fourth time. The Queen visited Beau Sejour for the official address before moving onto Castle Cornet where Her Majesty opened the 201 Squadron Museum. Her Majesty also unveiled the plaque on the Millennium Stone at L’Ancresse.

1957: Having acceded to the throne on 6 February 1952, Queen Elizabeth II, accompanied by her husband, Prince Philip, visited Guernsey where they were presented with gifts for their children, Prince Charles and Princess Anne, at Cambridge Park where thousands of schoolchildren had gathered. Their itinerary ended with a fireworks display over Castle Cornet.

2005: The Queen made her final visit to the Bailiwick to mark 60 years of liberation. Her Majesty unveiled a commemorative stone, which is located in close proximity to the Liberation Monument.

The stamp depicts a recent photograph of The Queen, which was taken at Holyroodhouse, the official residence of the monarchy in Scotland, as Her Majesty attended the Ceremony of the Keys in Edinburgh, 27 June 2022. During the ancient ceremony, which marked the beginning of Holyrood Week, The Queen was symbolically offered the keys to the City of Edinburgh by the Lord Provost on the day of her arrival. 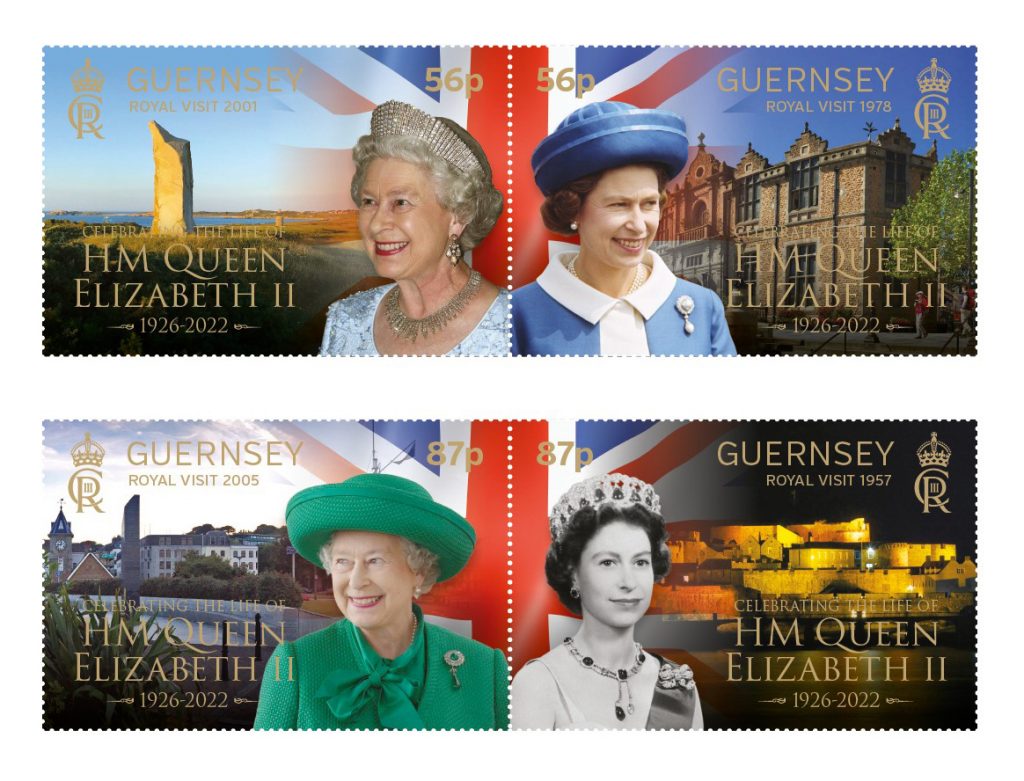