Guernsey Post announces the release of the final stamps in its five-year series to mark the centenary of WW1, which feature some of the memorials created to commemorate islanders who died in the Great War.
The stamps: –

The Royal Guernsey Light Infantry (RGLI) was formed in 1916 to show the island’s devotion to the Crown. Its first major engagement was at the Battle of Cambrai where half of the regiment was killed, injured or reported missing. The memorial in St Peter Port’s Sunken Gardens, seen on the 46p stamp, is twinned with one in Masnières, France, where the men made their stand.

The first of two Rolls of Honour depicted on the stamps is for the Guernsey postal workers who enlisted and died in service across a breadth of regiments, including the RGLI and the Post Office Rifles. Their names are captured in a beautifully illustrated memorial (62p stamp), which is located in the archives of the Guernsey Museum.

The second Roll of Honour comes from Guernsey’s Elizabeth College. The College crest depicted on the 63p stamp includes the school motto Semper Eadem: Always the Same. This was the personal motto of Elizabeth I, which celebrates integrity, stability and composure, come what may.

The 1914 Alderney Commemoration Stone (76p stamp)is found in St Anne’s Memorial Garden. It was unveiled in 2014 to mark 100 years since the start of the War, where it was announced that the town church bells would ring out a quarter peel to mark the centennial anniversaries of the days when each of the 41 local men lost their lives.

The Guernsey War Memorial, featured on the 85p stamp, is located at the top of Smith Street looking out over the town of St Peter Port. Designed and built by local craftsmen, it was unveiled in 1926 by Guernsey’s Lieutenant Governor, Major-General Charles Sackville-West with the Bailiff, Sir Havilland de Saumarez, presiding and thousands of islanders in attendance.

At the top of the Memorial stands a victorious St George with the head of the dragon at his feet, which also features on the Memorial Window of St Peter’s Church in Sark (94p stamp). The window is inscribed with the names of 16 local men who were killed in the conflict.

Bridget Yabsley, head of philatelic at Guernsey Post, said: – “Our fifth set of stamps complete our five-year programme to commemorate the centenary of the First World War. Over the past few years we have unearthed a wealth of information about the many men and women of the Bailiwick who stepped forward to serve for King and Country. It has been an honour to tell their stories through our stamps.

“Our limited edition souvenir folder houses the complete set of stamps in our Great War series. A memorial in its own right, it details the 1,500 brave individuals who fell during the conflict. The folder also contains a miniature replica of the Royal Guernsey Light Infantry flag GLI flag that hangs in the Town Church, St Peter Port, Guernsey.”

The stamps and related products, including the limited edition folder, are available to pre-order from 22ndOctober by visiting www.guernseystamps.comor contacting Guernsey Philatelic Bureau on +44 (0) 1481 716486. 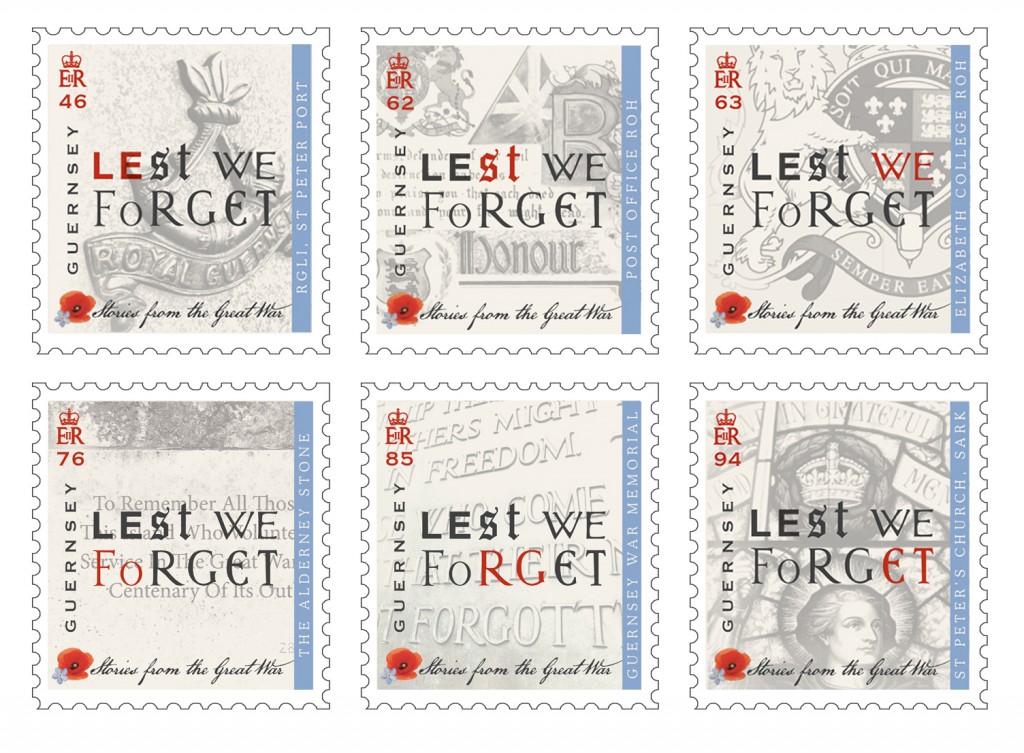