Stamps depicting whimsical witches have been released by Guernsey Post’s philatelic bureau (stamp issue date: 21 May 2022). Created by Keith Robinson, the stamps reflect stories of Guernsey’s folklore history and include a Europa stamp as part of the PostEurop stamp issue theme ‘Stories and Myths’ for 2022.

52p stamp: The island’s wizards, witches and warlocks are said to have gathered at Le Catioroc, their popular midnight haunt found between l’Eree and Perelle, where they would take part in a ceremony known as Le Sabbat des Sorciers. Stories suggest that they would dance around and worship the devil in the form of a black goat.

73p stamp: A coven of witches fly home after Le Sabbat without broomsticks. The witches of Guernsey go against tradition and, according to folklore, fly using their invisible wings instead of brooms.

79p stamp (Europa stamp): Many of Guernsey’s old houses and cottages in the west of the island have a piece of granite sticking out from the chimney, which are known as “witches’ seats”. It is said that they were built so that the witches would look favourably on these homes and not cast any spells on them, nor would they fall down the chimney and take up residence inside!

£1.10 stamp: This image depicts the tale of the ‘Witch in the Hedge’ who flew too low on her way back from Le Sabbat. Legend has it that she was discovered in the hedge at daybreak by a farmer’s wife who was up early to tend her cows. The witch warned her not to tell a living soul, but the farmer’s wife couldn’t keep the secret and once her husband heard what had happened, his wife was struck deaf until the day she died.

£1.26p stamp: ‘Jean Falla and the Witches’ tells the tale of an experienced local fisherman who got caught up in an unexpected storm at sea. In a howling wind he heard a peal of unearthly laughter and looked up to see a coven of witches flying above him. When he returned to dry land, he hastily jumped astride a Guernsey cow, which took off across the field before stopping suddenly and causing Jean Falla to fall into a muddy ditch to the sound of unearthly laughter. After scrambling home safely, he vowed from that point on to treat all old women with respect.

£1.35p stamp: During a period of fascination and fear of sorcery and witchcraft that swept Europe in the 16thand 17th centuries, 103 people were found guilty of witchcraft in Guernsey. A plaque in the island’s capital, St Peter Port, commemorates a witch-burning. It is said that some of the narrow flights of steps, as depicted on the stamps, are haunted by those witches who met their end in the flames.

The stamp products are available now at www.guernseystamps.com or by calling Philatelic Customer Services on +44 (0) 1481 716486. 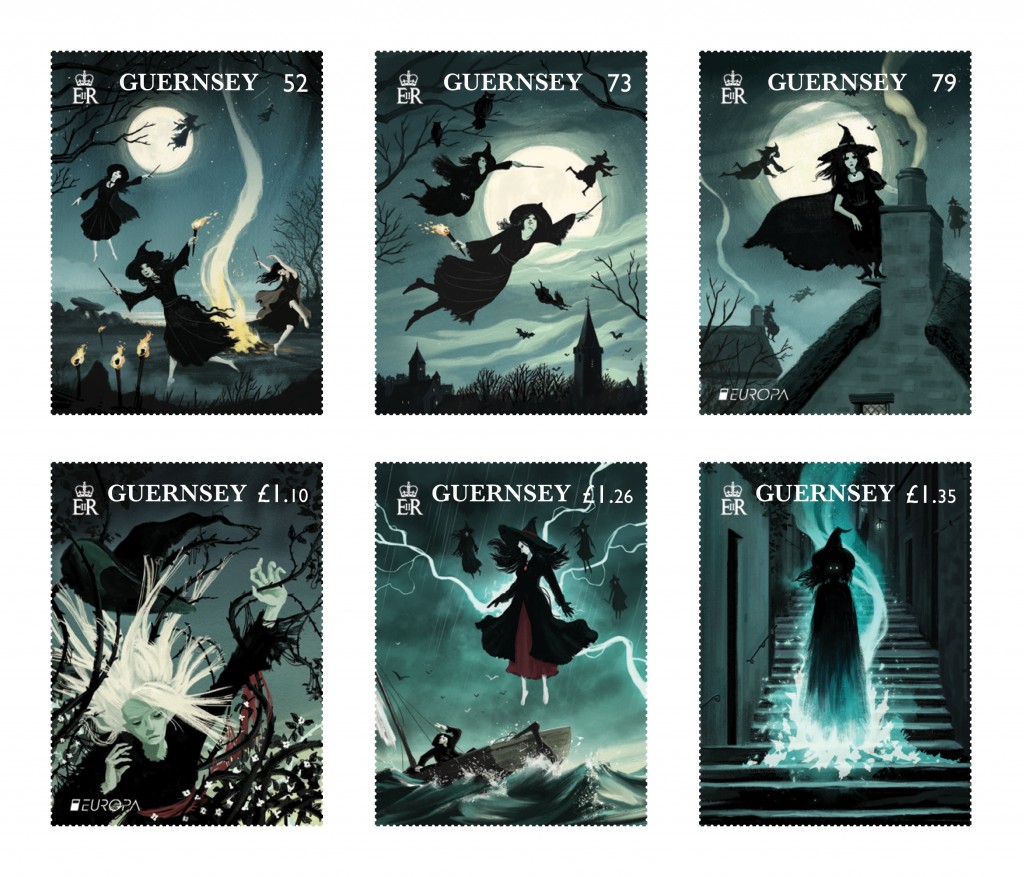