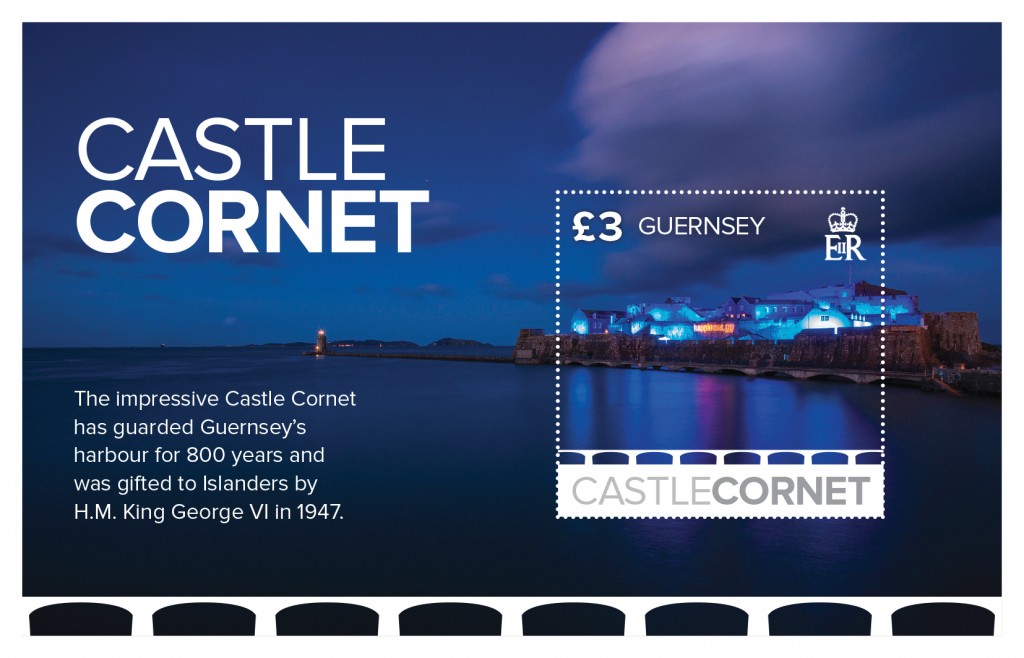 Guernsey Post announces that the island’s most famous Castle, Castle Cornet, is the subject of its Europa stamp issue (release date 4 May).

Steeped in history, Castle Cornet has stood guard over St Peter Port’s harbour on the former tidal island of Little Russel for 800 years. Built in 1204 to defend what was once a busy trading harbour, it remains surrounded by the sea, a short walk from the town centre with spectacular panoramic views of St Peter Port and out across to the other Channel Islands.

The Castle’s numerous embrasures, towers, batteries, bulwarks and bastions were built over the years to house cannon, and arm it against the threat of foreign invasion. It has seen many battles, from the Hundred Years’ War and the English Civil War to numerous conflicts with the French. More recently it was occupied by a German garrison in WWII.

Today the Castle, listed as a Protected Monument in the late 1930’s, is a museum in itself, and also houses five museums within its walls.

44p – A ‘Noonday Gun’ ceremony was re-introduced at Castle Cornet in 1974. At 12 noon the order is given and the gun is ‘fired’ sounding out across the town.

59p – The beautiful Governors’ Garden at Castle Cornet is planted in a formal 18th century style and is designed to resemble a tapestry when viewed from above.

60p – During the warm summer evenings the ancient Castle Cornet provides a perfect backdrop for exciting music events and festivals.

73p – Castle Cornet provides the perfect dramatic backdrop when the Guernsey History In Action Company brings the island’s past to life with a programme of intriguing and entertaining performances.

80p – General Sir John Lambert was imprisoned at Castle Cornet for ten years. He was a noted horticulturist and a garden bearing his name remains to this day.

90p – Visitors to Castle Cornet can enjoy Guernsey’s history brought to life by a talented team of storytellers clothed in fabulous period costume.

£3 Miniature Sheet – The impressive Castle Cornet has guarded Guernsey’s harbour for 800 years and was gifted to Islanders by H.M. King George VI in 1947.

Said Bridget Yabsley, head of philatelic at Guernsey Post: – “We are delighted to be able to feature for Europa’s Castles theme the much admired and striking Castle Cornet, which not only has a rich and colourful past, but is also very much a living castle and one that will no doubt continue to stand the test of time.”

Guernsey’s Europa stamps and other products, including a miniature sheet, are available to pre-order from 18 April 2017 at www.guernseystamps.com or by calling Philatelic Customer Services on +44 (0) 1481 716486.