Guernsey Post’s philatelic bureau announces that it will release commemorative stamps to mark 40 years since the Falklands Conflict, when Argentinian forces invaded the British overseas territory of the Islands in the South Atlantic. It was a brief but bitter conflict during which 649 Argentine troops and 255 British servicemen lost their lives, as did three Falkland Islanders (stamp issue date: 21 May 2022).

British forces landed on the islands on 21 May 1982. After a series of activities against the Argentinian Army, they began the battle for Stanley, the islands’ capital, on 11 June, before the Argentinian forces surrendered on 14 June.

HMS Ardent (F184), depicted on the 52 pence stamp, was one of four Royal Navy ships sunk during the conflict. Having come under air attack, she eventually stopped in the shallow waters of Grantham Sound. With the crew having abandoned ship, Ardent continued to burn throughout the night until she sank at 06:30 the following morning.

In 2021, a Falklands Memorial Bench (£1.10 stamp), was unveiled at the historic Belvedere building on Plymouth Hoe, which has a monument listing the names of all maritime personnel who died in the Falklands War.

A memorial plaque and tree found in Le Foulon Cemetery in Guernsey (£1.26 stamp) commemorates Guernseyman, Petty Officer Peter Ian Herbert Brouard R.N., who was serving with 815 Naval Air Squadron and died in action aboard HMS Ardent on 21 May 1982.

HMS Amazon returned HMS Ardent’s ship’s bell from the Falklands, depicted on the £1.35 stamp. In 1982, the bell was installed in St Nicholas Church, HMS Drake, the Royal Naval barracks at Devonport, England, where it was accepted by Commander Alan West, captain of the Ardent during the Falklands conflict.

Bridget Yabsley, head of philatelic at Guernsey Post, said: – “2022 marks 40 years since the Falklands Conflict, which we are proud to commemorate with stamps depicting HMS Ardent in action, and some of the memorials for those who lost their lives in the conflict.” 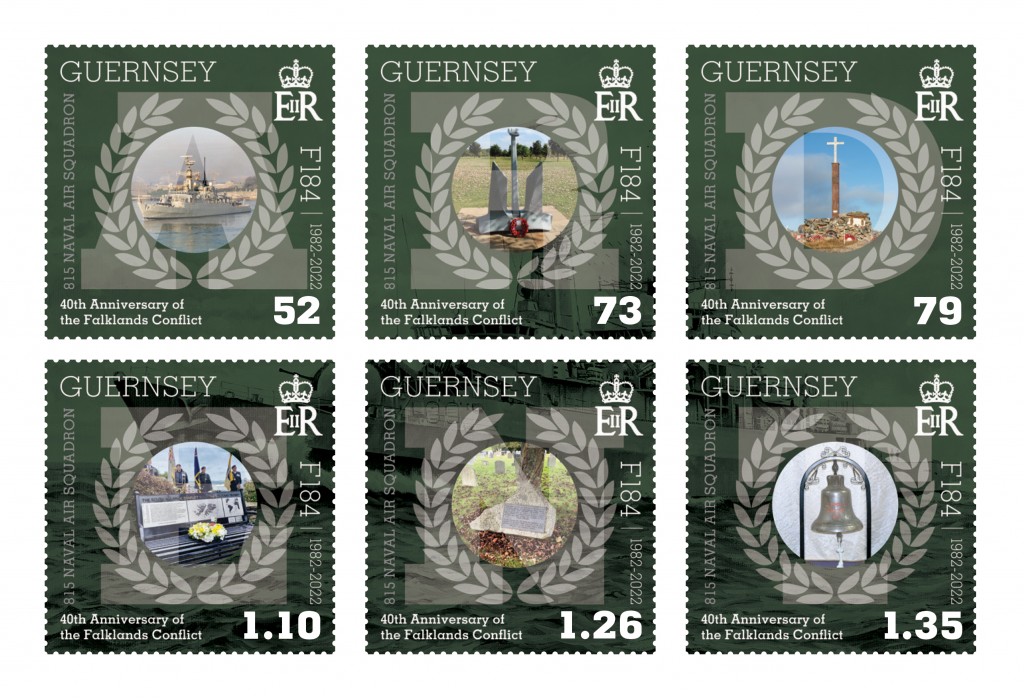