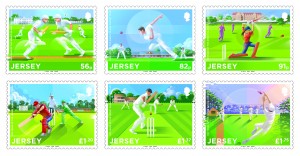 The 100th anniversary of the Jersey Island Cricket Club will be celebrated with six stamps and a miniature sheetlet to be issued by Jersey Post on 7 July 2022. Illustrated by Jersey artist Ron Mills, the stamps feature different aspects of the game, as well as landmarks from the Island’s six main cricket grounds. 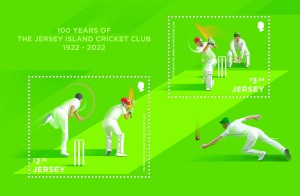 Whilst the earliest records of cricket in Jersey show that the game was played from the mid-1860s, the true era of development of the game on the Island came following the formation of the Jersey Island Cricket Club in 1922. Today, Jersey Cricket has a strong development programme which builds from grass roots level. Fully qualified coaches help youngsters through coaching programmes in schools and the community and provide competitive opportunities for national teams from U11s to U19s, which is the pathway to the senior national team. Jersey also puts a high priority on developing women’s cricket from grass roots level to the senior national side, and the Jersey Lionesses women’s team is currently ranked 35th in the world.

The six commemorative stamps depict different levels of cricket played on the Island including junior, men’s and women’s cricket and club and international levels, all of which are thriving in Jersey. Artist Ron Mills says of the project: “”I was delighted to be offered this commission from Jersey Post featuring local cricket. The brief suited my retro/modern painting style perfectly. I was keen that the central figures portrayed movement and action in contrast to this style’s mechanical and angular nature. I hope everyone enjoys the artwork as much as I did creating it.”

Featured on the stamps are: players running between the wickets at Florence Boot (FB) Fields, a player bowling at Farmers Cricket Club, Jersey Lionesses batting with Victoria College in the background, wicket-keeping and umpiring Junior cricket at St Michael’s School, batting and bowling at Grainville Cricket Ground and fielding at Les Quennevais.

Jersey Post’s 100 Years of the Jersey Island Cricket Club stamps will be available to buy from all branches of Jersey Post from 7 July 2022, whilst philatelic stamp products such as miniature sheetlets, first day covers and presentation packs will be available from the Jersey post offices at Broad Street and Rue Des Pres. All items can be ordered now at www.jerseystamps.com or by telephoning the Jersey Philatelic Bureau on: +44 (0)1534 616717.