Post Luxembourg is issuing a new series of stamps on September 13th 2022.

First of all, a block in honor of the 400th birthday of Jean-Gaspard de Cicignon, a well-known military officer and city planner from Luxembourg , will be released.

A special stamp will illustrate “Postcrossing”, a project connecting people all over the world. Based on postcards sent, Luxembourg is ranked in the top 50 most active territories, which for a country with a population of just over 650.000 is very respectable.

Another special stamp will  honor the 10 years of marriage of the Hereditary Grand Ducal Couple, his Royal Highness Prince Guillaume and Countess  Stéphanie de Lannoy.

Furthermore, a special stamp is issued on the topic of the “SEPAC Local Beverages” by highlighting Luxembourg’s wine region.

Last but not least, a special stamp will be issued on the occasion of the 81st Stamp Day.  The stamp shows the well-known cooling towers located between Differdange and Niederkorn which are transformed into a stunning work of art works by street art artist Alain Welter.

He entered the Danish military service as an officer in 1657 and became Commandant of Bergenhus fortress in Norway in the early 1660s, which he extended. After losing a battle in Sweden, he returned to Norway at his own behest, ending up in Fredrikstad in the south of the country. He was responsible for the strategic extension of the fortifications there too, and became renowned as a designer of fortifications.

When the Norwegian city of Trondheim was all but burned to the ground overnight in April 1681, it was again fortification architect Jean-Gaspard de Cicignon who drew up a plan not only to rebuild the city but at the same time to improve fire safety. To this day Trondheim still has the wide streets and the symmetrical grid of squares that typified his design.

His work was so comprehensive and well thought-through that his ideas fed into the history of urban development throughout the century and were discussed in urban planning circles in Scandinavia, Germany, the United Kingdom and the United States. He was posthumously named “Vauban of the North” after the French military architect Sébastien Le Prestre de Vauban.

Jean-Gaspard de Cicignon is one of the few Luxembourg nobles who has gained international renown. He died in 1696 in Fredrikstad in Norway where schools, streets and market squares still bear his name. 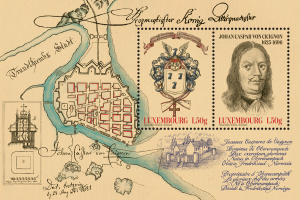 In an increasingly digital world, there are still lots of people out there who like to get “snail mail”. This is what Postcrossing is all about: Postcrossers regularly receive postcards from all corners of the world – that is, as long as they themselves regularly send postcards.

How does it work?

1. Sign up for free at postcrossing.com. Postcrossers will be given a Postcard ID and an address.

2. The sender writes their ID on the postcard before sending it off to their assigned recipient.

3. The recipient registers the ID on the postcard they received, and the sender receives confirmation of receipt.

The more cards you send, the more you receive.

It’s completely up to the sender how they write the card: Anything is possible, from a simple greeting to a long message with illustrations.

The project was started as a private hobby by a student in Portugal in 2005, but was soon opened up to the general public. In 2008, Postcrossing reached the milestone of 1,000,000 postcards received; by January 2021, 60 million had been received and the number of postcrossers had grown to more than 800,000 from more than 200 countries.

However, the Postcrossing initiative is not confined to sending postcards by mail. Postcrossers organise meet-ups worldwide, some in spectacular settings and some in multiple locations simultaneously. It goes without saying that postcards of these events are particularly prized among postcrossers.

Luxembourg also has an ardent postcrossing community; based on postcards sent it is ranked in the top 50 most active territories, which, for a country with a population of just over 650,000, is very respectable. 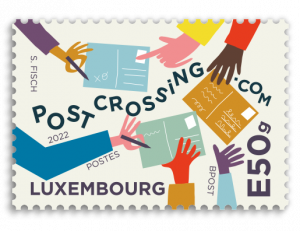 10 years of Marriage of the Hereditary Grand Ducal Couple

The religious ceremony was officiated by His Excellency Jean-Claude Hollerich S.J., then Archbishop of Luxembourg, in the presence of their families and statesmen and women as well as many monarchs and representatives from abroad. Some members of the public were invited by Their Royal Highnesses to attend the royal wedding in the cathedral.

The memory of the festive and joyful atmosphere the whole day long in the city of Luxembourg has stayed with many guests and visitors, helped, no doubt, by the beautiful fireworks displayed that evening watched by the newly married couple, as well as two music concerts at Place Guillaume II.

The ceremonies and festivities for the royal wedding began on the morning of 19 October with HRH Prince Guillaume and Countess Stéphanie de Lannoy attending a reception at the Grand Theatre in Luxembourg, where they met representatives of Luxembourg City youth movements and organisations as well as young people born on the same day as the young couple or who were also getting married on 20 October 2012. That afternoon HRH Prince Guillaume and Countess Stéphanie de Lannoy were married by the then Mayor Xavier Bettel in a civil ceremony at Luxembourg City Hall. A gala dinner took place in the evening at the grand ducal Palace.

Their Royal Highnesses Prince Guillaume and Princess Stéphanie became parents on the birth of Prince Charles in May 2020. The Hereditary Grand Duke and Hereditary Grand Duchess often take part in official cultural, business, social and sporting actvities in Luxembourg but frequently abroad as well. 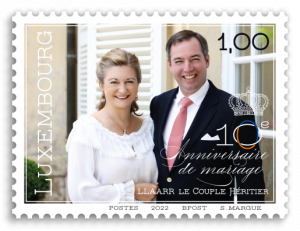 Luxembourg wine Limestone rock and clayey marl are two important formations that distinguish the soils of the Moselle Valley between Schengen and Wasserbillig and affect the character of the various types of wine. The relatively mild climate is another positive factor for the vineyards. As a result of these natural conditions, the Celts, the Gauls and after them the Romans all practised viticulture here. Since then, wine has played an important role in the history of this region in its economy, tourism and culture.

Predominantly white grape varieties are grown here, as they are ideally suited to the quality of the soils. The geological and geographical differences enable winemakers to produce powerful, racy wines from Elbling, Pinot Blanc and Riesling grapes as well as well-rounded and aromatic wines from Rivaner, Auxerrois and Pinot Gris grapes.

An important milestone in the development of Luxembourg wine of the quality we know and love today was the foundation in 1925 of the Wine Institute (IVV – Institut viti-vinicole) in Remich. Since then, the Institute has supported the winemakers by conducting research into and providing practical solutions for various issues concerning winegrowing. The Institute is also responsible for the official testing of Luxembourg’s wines and crémants to ensure compliance with the criteria of the protected designation of origin “Appellation d’origine protégée (AOP) – Moselle luxembourgeoise”, which replaced the „Marque nationale“ system with the 2014 vintage. 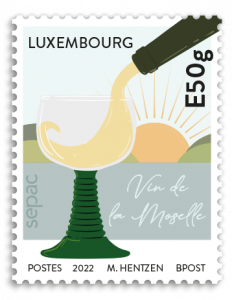 Luxembourg’s 81st Stamp Day comes from Philatelia Differdange. To shine a spotlight on the communities that feature in Esch22  European City of Culture, Differdange will be “Municipality of the Month” from 22 September to 21 October 2022.

With a population of just under 30,000, the “City of Iron” is the third-largest municipality in southern Luxembourg and part of Minett region, where iron ore mining began in the second half of the 19th century, thus laying the foundations for the development of an iron and steel industry. Production continues in Differdange to this day: For example, world renowned Grey steel beams – 12,500 tonnes of which went into building One World Trade Center in New York – are made here.

On the road from Differdange to Niederkorn, you will see five cooling towers – part of the steel industrial complex originally belonging to the company Hauts-Fourneaux et Aciéries de Differdange (HADIR) and today owned by ArcelorMittal.

Not only are the grey concrete towers witnesses of an era that defined the region but were transformed into artworks by street artist Alain Welter over the course of several months towards the end of 2020. This was emblematic of Differdange’s idea of bringing culture into the public space and – it must be said – the project has been a resounding success. The colourful graphics depict many details of the history of the steel industry and its impact on daily life and work; wagons and locomotives, tools and the typical terraced houses appear alongside miners at work and in leisure time, while Luxembourgish phrases refer to the distinguishing features of the place. 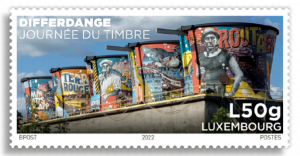