Six stamps and a Miniature Sheet will be issued by Jersey Post on 4 August 2016 to commemorate the events of World War I. The third in a five part series entitled: The Great War – 100 Years, this issue illustrates battles that have become landmarks of history’s most devastating conflict.

“The Great War involved a diverse range of nations and more combatants than any war before or since,” comments Chris Elligott, Philatelic Production Coordinator at Jersey Post. “Over 37 million became casualties, including a number of Jerseymen. Many of the war’s key battles, fought from the fields and towns of Northern France and Belgium to the deserts of the Middle East and the wild expanse of the North Sea, have become synonymous with the massive and futile loss of life.”

Illustrated by Chris Wormell, the six stamps depict the First Battle of Ypres, Gallipoli, the Battle of Jutland, the Somme Offensive, the Battle of Aqaba and Passchendaele. The 88p stamp portraying the Battle of Aqaba is particularly striking and shows T.E. Lawrence mounted on his camel at Aqaba on the southern coast of modern day Jordan. T.E. Lawrence, also known as ‘Lawrence of Arabia’, lived in Jersey for a short time at a house in Havre des Pas, St Helier which today can be identified by a commemorative plaque. A military officer and strategist, Lawrence was assigned by British Intelligence to act as liaison in the Arab revolt against the Ottoman Turkish Empire.

A Miniature Sheet accompanying the set of six stamps features the Battle of Cambrai, a battle which saw the first large-scale use of tanks for a military offensive. 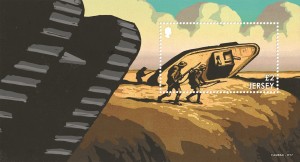 The Great War stamps will be available to buy from all branches of Jersey Post from 4 August 2016. Philatelic stamp products such as sets of stamps, Miniature Sheets, Souvenir Sheets, First Day Covers and Presentation Packs will be available from the Jersey post offices at Broad Street, St Helier and Rue Des Pres, St Saviour on issue day and can be ordered now at: www.jerseystamps.com or by phoning the Jersey Philatelic Bureau on: 00 44 (0)1534 516320.