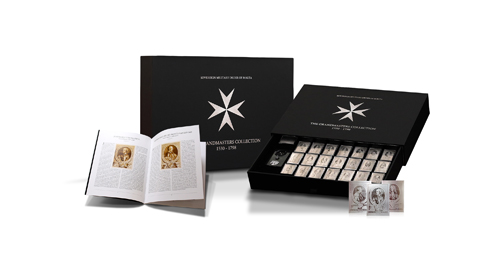 On 24 March 2016 MaltaPost issued a set of 28 stamps depicting grandmasters of the Sovereign Military Order of St John of Jerusalem and Rhodes and Malta (SMOM) that served in Malta from 1530 to 1798.

The SMOM arrived in Malta in 1530 after Emperor Charles V, with the approval of Pope Clement VII, granted the Islands to them. Throughout its occupation of the Islands, the Order left an indelible mark by transforming our culture, architecture and way of life. Indeed many aspects of our identity and the landscape of our country would not be quite the same had it not been for the influence of the Order. Perhaps their major legacy is the City of Valletta which this year celebrates the 450th anniversary of its foundation.

This collection replicates, in pure silver foil, the postage stamps that were released in 2014. Although intended as a philatelic issue the silver foil stamps, each bearing a face value of €14.15, may be used for postage. The issue is available as a full collection and is limited to just 650 sets. It is housed in a presentation box with each silver foil stamp in a capsule, together with a complete set of the 2014 stamp issue plus an additional silver foil image of an antique map of the Maltese Islands. The collection also includes a magnifying glass and a special publication, giving a profile of each grandmaster that served in Malta.