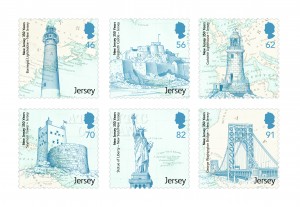 The US State of New Jersey celebrates the 350th anniversary of its founding in 2014 and Jersey Post will mark the occasion with a set of six stamps capturing the significant and historic link it has with the island of Jersey.

According to Jersey Post’s Senior Philatelic Manager, Melanie Gouzinis: “Being such a small island, we find that people often don’t know about the direct association between Jersey and the State in America. In fact, New Jersey was named after the birthplace of Sir George Carteret, a former Bailiff of Jersey who held the office for eight years from 1643 to 1651.”

Sir George Carteret was one of the eight original proprietors granted the area of Carolina in North America in 1663, in recognition of providing exile to the future King Charles II during the English Civil War. “The young Prince Charles stayed at Elizabeth Castle in Jersey,” continued Mrs Gouzinis, “and we worked together with the design agency, True North, to produce a detailed set of stamps featuring this, and other, iconic landmarks of both Jersey and New Jersey overlaid on a backdrop of the vast North Atlantic Ocean.”

The six stamps have also been presented as a commemorative Souvenir Sheetlet where they come together to form a single illustration. 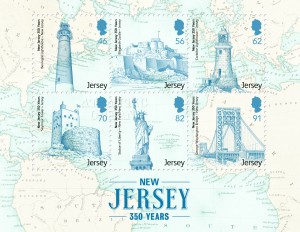 The stamps will be available to buy from all branches of Jersey Post from 15 September 2014. Philatelic stamp products such as sets of stamps, First Day Covers and Presentation Packs will be available from the main post office at Broad Street, St Helier, Jersey, on issue day and can be ordered now at: www.jerseystamps.com or by phoning the Jersey Philatelic Bureau on: 00 44 (0)1534 616320.