Today 11th September is issue day for Iceland Post…  3 new stamps are being released : the fourth of our Lighthouses series, and a stamp commemorating the 800th Anniversary of Sturla Þórðarson.

The stamp featuring Dýrhólaey Lighthouse on the southernmost point of Iceland is for domestic non-priority use and worth 125 ISK, whereas the Akranes Lighthouse stamp is for international priority use to outside Europe and worth 240 ISK. 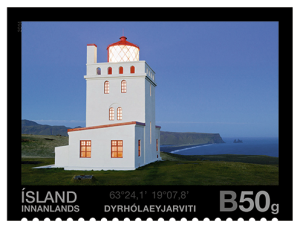 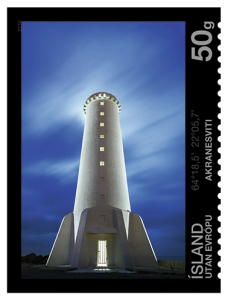 Sturla Þórðarson (1214-1284) was a chieftain, a poet and an historian. The main sources on his life are to be found in the Saga of Icelanders.

He was one of the most powerful men and one of the most influential leaders in Iceland during the Sturlungs era, and even today he holds a special place in the hearts and the collective memory of Icelanders. Sturla witnessed some of the major dramatic events in Iceland’s medieval history, which he later described in his writings.

The motif on the Sturla Þórðarson stamp is a stylized viking helmet and a quill point, referring both to Sturla’s talent as an historian and poet and to the Saga of Hakon, King of Norway, which Sturla wrote in the 13th Century. This stamp is for priority postage to Europe up to 100g and worth 310 ISK. 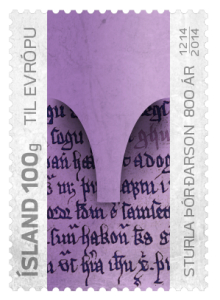 All of these stamps are available here ,  as well as the other 2014 issues.