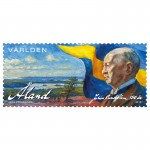 No other individual has played a similarly important role for modern, autonomous Åland as Julius Sundblom (1865-1945), also known as the “King of Åland”. On 22 June, Åland Post commemorates his 150th birthday with the issue of a stamp.

In the early 1900s, the world situation was unstable with ongoing wars and revolutions. The turbulent times made the people in Åland turn to the old mother country Sweden in the west. Subsequently, Julius Sundblom became the leader of the Åland Movement. At the time, he was one of the leading figures in Åland as founder of the only local newspaper and member of the Diet of Finland.

The dream of reuniting Åland with Sweden never came true, however; in 1921, the newly founded League of Nations presented a compromise that Åland become a self-governed, demilitarized province of Finland with international guarantees to protect the Swedish language and culture. Dan Nordman, history teacher and Julius Sundblom specialist, believes that it was at the time of defeat that Sundblom demonstrated his greatness.

“Despite the blow, Sundblom didn’t think of starting a countermovement or try to sabotage the decision. Instead, he went all in to reunite Åland and make the best of the situation; to develop the autonomy as far as possible”.