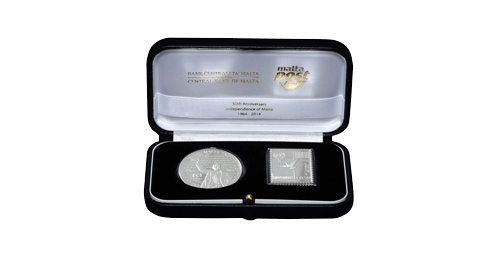 On Wednesday 14 May 2014, the Central Bank of Malta and MaltaPost launched a joint product consisting of a numismatic silver coin and a silver stamp, commemorating the 50th anniversary of Malta’s Independence. This product also marks the start of a working relationship between the two institutions in the marketing and sales of the Bank’s numismatic and commemorative coin products.

During his address, Professor Josef Bonnici, Governor of the Central Bank of Malta, drew parallels between the two institutions through their commitment to commemorate national events and personalities. Professor Bonnici spoke about the economic transformation that was set in motion by Independence, not least the creation of a central bank. The Governor added that since Independence, gross domestic product per capita shot up from the equivalent of €534 in 1964 to €7,186 in 2013, a more than 13-fold increase, while the population increased by more than 100,000 over the same period, highlighting the rapid industrialisation and development of Malta’s economy since the constitutional milestone of Independence.

During the event held at the Bank, Professor Oliver Friggieri addressed the historical, constitutional and social significance of Malta’s Independence and its important contribution and link to the milestones that followed, mainly, the Republic declaration in 1974; the termination of Military Facilities Agreement in 1979 (also known as Jum il-Helsien); and Malta’s accession to the European Union in 2004.

Mr Joseph Said, Chairman of MaltaPost, spoke about the significance of the joint product and on the collaboration between the two institutions.