Home › Uncategorized › Liberation 75 to be commemorated with Jersey stamps

Liberation 75 to be commemorated with Jersey stamps 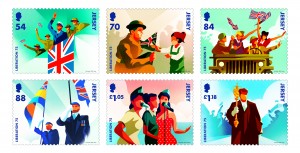 The 75th anniversary of the liberation of Jersey will be commemorated with a set of six stamps to be issued by Jersey Post on 9 May 2020. Created by True North, the stamps depict key moments in a contemporary celebration of Liberation Day.

During the first year of World War Two, on 1 July 1940, German troops arrived to take the surrender of Jersey and for the next five years, Jersey, Guernsey, Sark and Alderney were the only parts of the British Isles to be occupied during the war. On 8 May 1945, German forces surrendered and the war in Europe ended. The following day, Royal Navy destroyer HMS Beagle arrived off the coast of Jersey and accepted the surrender of the occupying forces. Liberation Day is celebrated each year in Jersey on 9 May and includes a series of official ceremonies.

“Seventy-five years after the momentous events of May 1945 we wanted this stamp issue to commemorate the still huge importance of the Island’s national day to the people of Jersey,” explains Chris Elligott, Philatelic Design and Production Manager at Jersey Post. “Creating illustrations with echoes of 1940s poster style, the stamps show how the liberation continues to be celebrated by the people of Jersey; of course the formal ceremonies and re-enactments, but also the spirit and joy of the gift of freedom that our community is so fortunate to cherish today.”

Adele Littler, Senior Designer at True North comments of their approach to the stamp designs: “Jersey’s national day – the annual event to mark the island’s liberation, is such an important occasion in Jersey’s history and has been documented in stamps many times. The brief was to find a new way to depict the celebrations. We worked with illustrator Charlie Davis to relive the joyous moments of 9 May, with the styling partly inspired by the iconic poster designers of the time.”

In addition to the stamps, Jersey Post will be issuing 75 strictly limited edition, solid silver souvenir coins to mark the anniversary. The obverse of the coin beautifully depicts the joy of freedom following the liberation of Jersey at the end of World War II, whilst the reverse features the emblem of the troops that liberated the Island, together with Churchill’s famous quote “…and our dear Channel Islands are also to be freed today.” The coin comes beautifully presented in a wooden presentation box with a numbered certificate of authentication. 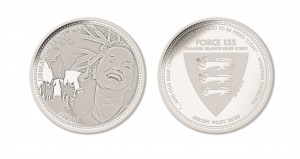 Jersey Post’s Liberation 75 stamps will be available from branches of Jersey Post from issue day. Philatelic stamp products such as First Day Covers and Presentation Packs can be ordered now at www.jerseystamps.com or by telephoning the Jersey Philatelic Bureau on: 00 44 (0)1534 616717.