The young of Icelandic domestic animals – last in the series

The fourth and last set in Postphil’s series “The young of Iceland’s domestic animals” are to be released in May this year. After kids and kittens in 2017, calves and lambs in 2018 and puppies and horses in 2019, 2020 will see the release of the last of our “animals of honour”, the chick and the piglet.

Settlement chickens are an Icelandic variety of chicken that belongs to the subspecies Gallus gallus domesticus.
As their name would indicate, settlement chickens came to Iceland with the first settlers coming from Norway in the 9th Century. Research shows similarities with old Norwegian chickens. They are quite small and hardy and come in a variety of colours. 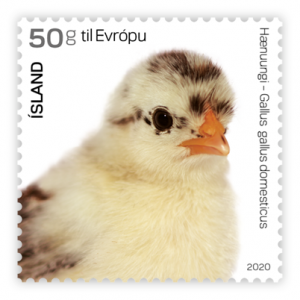 Pigs first set hoof in Iceland with the first settlers (and their chickens!) at the end of the ninth century. It is believed that pigs lived almost wild after that. Many place names in Iceland refer to pigs, such as Svínafell (Pig mountain), Svínavatn (Pig lake), Galtarholt (pigs hillock), Galtalækur (Pig stream) etc… These names give us insight on the importance pigs must have had through the ages. 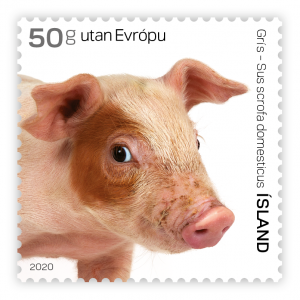 If you don’t make it to the countryside, you can see pigs and chicks at the Family Park and Zoo in Laugardalur in Reykjavík.
The Zoo includes most Icelandic animals, both wild and domesticated, from foxes and reindeer to seals and cattle, horses, sheep and of course hens and pigs!

Both stamps were designed by Hlynur Ólafsson – photographs by Bára K. Kristinsdóttir.