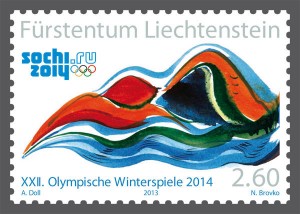 From 7th to 23rd February 2014 the 22nd Winter Olympic Games take place in the hinterland of Sochi, one of Russia’s most popular Black Sea bathing and health resorts. Although the climate in the town itself is sometimes subtropical, the nearby mountains of the Caucasus beckon with their snow-covered slopes.

As in previous decades Liechtenstein will be entering a small but potent team in these Winter Olympics. As always, Liechtenstein’s medal winning ambitions will of course be limited to the alpine skiing events, in which the little Principality has several times been very successful in the past.

Since 2008, when the Summer Olympics took place in Beijing, Philately Liechtenstein has entrusted the design of the commemoratives which have appeared regularly since 1972 to mark these major sporting events to artists from the country hosting the Games. For the stamp issue marking the 22nd Winter Olympic Games two Russian artists have been commissioned to design this traditional set. Natalia Brovko and Alexander Doll were both born in Orenburg, near the border with Kazakhstan. While Alexander Doll commutes as a freelance artist between Moscow and Berne, Dr. Natalia Brovko lives in her home city of Orenburg, where amongst other things she teaches at the State University of Art. For the “Sochi 2014” stamp (face value CHF 2.60) Philately Liechtenstein has in conjunction with these two artists broken new ground in stamp design. A stone originating from Sochi was ground up, mixed with paint and applied to the stamp by thermography. If one passes a finger over the stamp, the milled stone can be clearly felt.