Luxembourg new stamp issues in May 2018

Post Luxembourg issues new series of stamps on May 15th 2018

Post Luxembourg is releasing a special series of EUROPA stamps. The visuals used are drawings from students of primary and secondary classes For the primary students, the theme was how bridges are integrated in their respective environment. For the secondary students, the focus was on interpreting the theme in a figurative sense: “what do bridges mean to you”. More than 800 students participated in this competition. A jury selected the respective winners in both age groups.

Furthermore, there will be a series of three famous Luxembourgish personalities. Jean Schortgen a Luxembourgish miner, trade unionist and politician. Hélène Palgen, a Luxembourgish linguist who ran the girl’s grammar school as its director. Last but not least, Antoine Hirsch the director of the “Ecole des Arts et Métiers” in Luxembourg.

Another special series of stamps will be presenting Luxembourg’s rare bird species. The Bluethroat, the Reed Warbler and the Barn Swallow are the first of a series of nine. .

Post Luxembourg  issues a special SEPAC stamp. This year’s theme is  “a spectacular view”.  As motif, the ruins of the Beaufort castle were selected.

A special block will present the Luxembourgian strongman “John Herkul Grün” for his 150th anniversary.

Finally, there will be a stamp praising the 150 years of the “Institut Grand-Ducal” whose purpose is to cultivate the sciences, literature and the arts.

Finally, there will be a stamp praising the 150 years of the “Institut Grand-Ducal” whose purpose is to cultivate the sciences, literature and the arts.

Jean Schortgen, born on 17 February 1880  in Tétange, was a Luxembourgish miner, trade unionist and politician.

Up until age 16, Schortgen worked in farming, after which he worked in mining and metallurgy. Having been raised in a family of day labourers, he was characterised at an early age for his commitment to poor and underprivileged people. In 1902, he became a member of the social democratic party, and in June 1914, Jean Schortgen was the first worker to join the Luxembourg Parliament. From 1904 to 1912, he was a party executive of the Tétange section. Jean Schortgen died on 1 May 1918 in an accident at the “Brommeschbierg” mine.

A large memorial at the cemetery of Tétange honours his memory to this day.

The Luxembourgish linguist Hélène Palgen was born on 25 August 1902 in Echternach, and died on 8 May 1993 in Luxembourg- City. She worked as a teacher and, from 1958 to 1967, ran the girls’ grammar school in Luxembourg as its director.

Hélène Palgen was one of the first researchers to study the Luxembourgish language in a scientific  manner. From the outset, she was a member of the language section of the Grand-Ducal Institute, and served as its president from 1969 to 1976. From 1950 to 1959, Palgen was chairman of the “Dictionnaireskommissioun”, which worked on developing a Luxembourgish dictionary.

Antoine Hirsch was born on 22 March 1868 in Eich, and died on 11 August 1934. He studied engineering in Liège and architecture in Aachen. He first worked in Augsburg than for the Maus Company in Frankfurt am Main. Subsequently, he moved to Budapest, where he worked as director of a branch belonging to the Frankfurt machine factory Riedlinger.

In 1897, he became director of the “Ecole des Arts et Métiers” in Luxembourg. Moreover, Antoine Hirsch was also a painter and an author. From 1901 to 1904, he was president of the “Cercle artistique de Luxembourg”. Furthermore he founded the “Revue technique luxembourgeoise”, which continues to be published to this day and in which he published numerous articles concerning the steel industry.

Like every other year, POST Luxembourg has organised a drawing contest for primary school children in the 3rd and 4th grades, and adolescents in secondary school. The young artists illustrated “bridges” as the main theme, which was established this year for the EUROPE series by the joint publication of European postal administrations.

Where and what types of bridges are there and how are they integrated into their respective environments? The primary school students drew and painted bridges as architectonic structures, just as they know them from their villages and communes.

For secondary school students, the focus was on interpreting the theme in a figurative sense. “What do bridges mean to you?” They transcend borders and link States, regions, cities and families. What further roles can they play?

More than 800 students participated in this competition and the jury had the difficult task of selecting the respective winners in both age groups, who will receive a prize of € 1,000 each. Their motifs will be published as postage stamps.

The prizewinners for 2018 are: Lola Kirsch and Gaia Vetere

POST Luxembourg is issuing a three-year special series together with “natur&ëmwelt” with the purpose of presenting Luxembourg’s rare bird species. Environmental change and people’s changing lifestyles are the reason why many migratory bird species cannot find the natural conditions they need to survive.

The first three species illustrated on postage stamps in 2018 can be found in the same habitat in Luxembourg.

The bluethroat lives in humid locations and feeds primarily on insects. In 2017, breeding activity was suspected following a long hiatus.

The Reed Warbler lives in reed areas. It climbs and hops proficiently around reed in order to find nourishment. This includes spiders, molluscs, insects, and larvae.

The Barn Swallow hunts any type of winged insect it can find close to farms, meadows and ponds. It builds its nest inside stables, garages, or under bridges. It spends the summer, from April to the beginning of October, in its breeding grounds.

The theme of the SEPAC members’ joint Issue for this year is “A spectacular view”. POST Luxembourg selected Beaufort castle as its motif. The medieval castle was built in four different construction periods between 1050 and 1650. Walter von Wiltz was the first Lord of Beaufort. During the various centuries, the castle changed ownership several times. From the second half of the 18th century, it remained unoccupied and was used as a quarry by the inhabitants of the surrounding area.

In 1928, the new owner of the castle, Edmond Linckels, cleared up the unoccupied ruins, which had been neglected for 300 years, and removed the wildly overgrown vegetation covering them. The building complex has been protected since 1988 as a national monument. The castle ruins’ location, on a cliff roughly 35 m above the town of Beaufort, provide magnificent views. A slight distance from the actual walls, one can even realize that the ruins have almost magically merged into a calm, green and harmonious environment. In 2012, the renaissance palais situated still 15 metres above, was also opened to the public for guided visits and forms a beautiful architectonic addition to the castle. 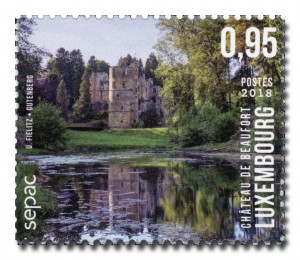 Jean “John” Grün was born on 27 August 1868 in Bad Mondorf and died on 3 November 1912 in Ettelbrück. He was a Luxembourgian strongman, better known as “Herkul”. Aged 21, he emigrated in America, where his talent was recognised by the professional athlete and strongman Alexander Marx. They held public appearances in America under the name “The Two Marks”. At the time, Grün was probably the most famous Luxembourger in the world due to his public appearances in America and Europe.

In 1892, Grün returned to his native country as the strongest man in the world, appearing in the “Grand Théâtre Fernando” at the 1897 Schueberfouer, and becoming one of the largest attractions.

In 1898, he succeeded in balancing a roundabout in the air, which held eleven people, for several minutes. During his public appearances, he bent nails with his fingers, broke horseshoes, allowed stones to be shattered on top of his chest with a large hammer, and lifted two horses in the air, mounted by adult riders, while standing on a platform above and using ropes. 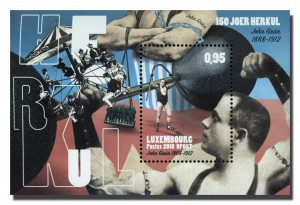 25 years of the Comic Book Festival in Contern

The 1st Comic Book Festival in Contern took place in 1994 thanks to the competence and enthusiasm of Mr Daniel Grun. He was not only able to convince the commune’s authorities, but also a large number of voluntary helpers right from the start. Today, the festival is known far beyond national borders and Contern is considered the “City of Comics” throughout the vast region. Each year, roughly 50 comic book authors welcome visitors and present their newest works. The opportunity to interact with authors and illustrators personally makes it quite special.

At the same time, the comic-book weekend is an ideal platform to shop for numerous accessories, such as figures, posters and illustrations. During the festival, the whole village of Contern is free of cars; local clubs and associations also participate in the event and prepare the corresponding programme in order to offer visitors of all ages a well-rounded experience. They have been successful since visitor figures continue to increase each year. 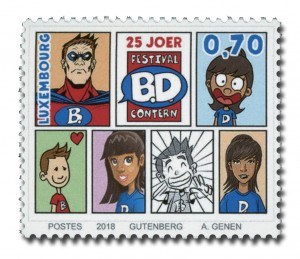 150 years of the “Institut Grand-Ducal”

Serving the arts and sciences for the past 150 years

Founded by a grand-ducal royal decree on 24 October 1868, the “Institut Grand- Ducal” was endowed with a new statute last December, just before celebrating its 150th anniversary, recognising it as a legal person governed by public law.

Article 2 of the law of 21 December stipulates that its purpose is to “cultivate the sciences, literature and the arts”. Hence, it is organised in six different sections: historical sciences; natural sciences, physics and mathematics; medical sciences; linguistics, ethnology and onomastics; arts and literature; moral and political sciences. Its goal for the future is to open up more broadly to the public.

The idea of creating an “anniversary” stamp is part of this policy of openness. A contest was organised with the arts education classes of secondary schools in Luxembourg. The projects submitted to the jury have shown a strong commitment on the part of students and their teachers, to find an image that represents the institute in all its facets. 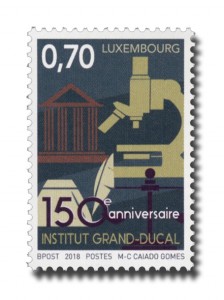