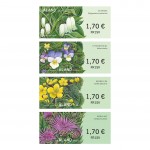 A new series of franking labels from Åland Post featuring colourful wildflowers replaces the current series of woodpeckers on 3 February. The adorable bunch of flowers is painted by visual artist Carolina Sundelin who places great emphasis on colour and form.

Solomon’s seal appears in early summer with white, vanilla scented tubular flowers with green tips. It grows around cairns, on wooded slopes and in swamps. Characteristic in May-June is also the marsh-marigold with its glossy dark green leaves and bright yellow flowers. It demands a humid habitat. Wild pansy flowers throughout the growing season until September. The flowers are usually multi-coloured but unicoloured flowers in shades from white to purple may be seen. It is common along road banks that are also adorned by brown knapweed in the late summer from July to September. Growing up to 80 cm, the capitular flowers of this herb are purplish-red and a favourite among butterflies.

Working as an artist and visual arts teacher in Åland, Carolina Sundelin made her debut for Åland Post in 2019 with four postal stationery cards on a crayfish party theme. The franking labels were an absorbing challenge, she confesses:

“The design was rather demanding, with limitations regarding motif, form and technique. I made a myriad of drafts before picking out the best ones to draw up with acrylic paint and contour markers. I usually paint in oil on large canvasses, and nature is typically my source of inspiration, but after that, I leave the rest to my creativity.”

Åland Post Stamps sells a series of self-adhesive franking labels consisting of four different motifs, all with the same value.