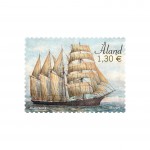 On 3 February, Åland Post issues the sixth and last part of the popular stamp series featuring Sailing ships. Artist Allan Palmer wraps up the series with two stamps dedicated to the barquentine Mozart and the 4-masted barque Viking, representing the last tall ships that participated in the renowned Grain Race between Europe and Australia.

Built in Scotland in 1904 for a German shipping company, barquentine Mozart was not well suited for long voyages. Her type of rigging made her slow and difficult to handle. Until the onset of World War I, she carried Chilean and Peruvian nitrate to Europe. Mozart went to France as war compensation and was sold to Åland shipowner Hugo Lundqvist in 1922. Her last voyage to Australia in 1935 took 110 days and resulted in heavy weather damages to deck and rigging and it was decided to scrap her. The stamp shows Mozart homeward-bound in the English Channel with the white cliffs of Dover in the background.

Built in Copenhagen in 1907 as a sail training ship for the Danish merchant fleet, 4-masted barque Viking was purchased by Åland top shipowner Gustaf Erikson in 1929. She made several voyages around the world before the war. In 1946, Viking set out on her last voyages, unloading her last cargo of wheat in London in 1948. Allan Palmer has illustrated the ship on her last and unusually long voyage from Australia, 139 days in severe weather. This voyage holds a special place for the artist; his father was third mate on the ship and his mother-to-be one of the passengers onboard. In 1951, the barque was sold to the city of Gothenburg where she still moors.

A first day cover and two maximum cards showing traditional ship’s portraits complete the stamps. So does a set of collector’s sheets produced in cooperation with the Åland Maritime Museum, giving background information about each vessel and holding the stamps in first day cancelled condition.