Home › Uncategorized › Year of the Rat celebrated on Jersey stamps

Year of the Rat celebrated on Jersey stamps 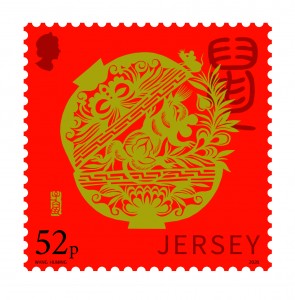 The Year of the Rat is the subject of Jersey Post’s first stamp issue of 2020, to be released on Friday 3 January. Illustrated by Wang Huming in Beijing, China, the issue comprises a single stamp and a Miniature Sheet and forms the fifth part in Jersey Post’s series celebrating the Lunar New Year, preceded by Year of the Pig (2019), Year of the Dog (2018), Year of the Rooster (2017) and Year of the Monkey (2016).

Also known as the Spring Festival, the Lunar New Year is the most important celebration in the Chinese calendar. It is celebrated by Chinese and ethnic communities around the world and is a time when families come together. The Chinese animal zodiac is a repeating cycle of twelve years; each of the twelve years is represented by an animal and 2020 is the Year of the Rat.

In Chinese culture, rats are seen as a sign of fertility, wealth and surplus. They are clever, quick thinkers and often successful. People born in the year of the Zishu rat are multi-talented. They are strong-willed and always finish what they begin.

The stamps have been designed by Wang Huming in Beijing, China. The Deputy Chief Designer of the Postage Stamp Printing Bureau of China Post, Wang Huming has created the designs for each of the issues in Jersey Post’s Lunar New Year series and has been continuously elected as the most loved stamp designer by Chinese collectors in recent years.

The stamp design denotes the Chinese fable Rat Biting Started the World. In Chinese culture, it is said that before the beginning of the world there was only chaos. Legend has it the rat bravely took a bite out of the sky, sunlight came in through the opening, then Yin separated from Yang, and the world started. The stamp features a bowl that symbolises the world, which the rat opens from within. The Chinese seal which appears on the left side of the illustration symbolises the rat.

The Miniature Sheet depicts part of a Chinese folk story, which fables a rat marrying off his daughter to the most powerful suitor, also known as Mouse of Marriage. The illustration portrays the daughter rat sitting inside the palanquin (Jiao) as she is carried to her wedding ceremony. The stamp and the Miniature Sheet both feature a gold metallic ink and varnish. 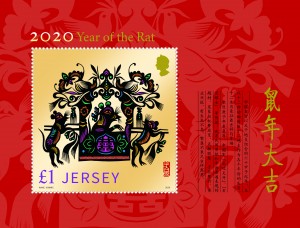 Jersey Post’s Year of the Rat stamps will be available to buy from all branches of Jersey Post from 3 January 2020. Philatelic stamp products such as Miniature Sheets, First Day Covers and Presentation Packs will be available from the Jersey post offices at Broad Street, St Helier and Rue Des Pres, St Saviour on issue day and can be ordered now at www.jerseystamps.com or by telephoning the Jersey Philatelic Bureau on: 00 44 (0)1534 616717.