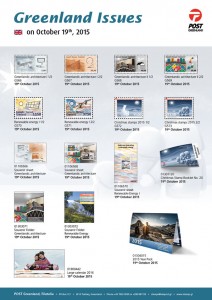 The issue includes eight stamps, three souvenir sheets, one stamp booklet, two souvenir folders and one year pack. The stamps will also be issued on First Day Covers. The stamp themes reflect historical and current as well as cultural themes in Greenland.

The last stamp issue in 2015 commences with four stamps in a new series ‘Greenlandic architecture’ for the Greenlandic culture and identity. Naja Rosing-Asvid has painted the first four designs in the series. Both stamps will be issued in normal complete sheets, two souvenir sheets and one souvenir folder.

As it is our tradition, two Greenlandic Christmas stamps will be issued as both stamps on gummed paper and in a self-adhesive booklet. Christian Fleischer Rex is the artist who has created the Christmas stamp-images 2015.

Finally, the 2015 stamp year is closed with the year pack, in which all the Greenlandic stamps and souvenir sheets of the current year are included.

On our website www.stamps.gl/en/news the stamp image files can be downloaded.