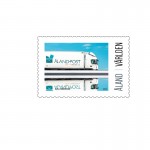 On 14 March, Åland Post issues a stamp featuring a modern Åland Post lorry in its new attire. Issued in the form of a mini-sheet of 8 stamps, the frame of the stamp issue is also a new alternative if you wish to produce personalized Åland stamps.


A new logo for Åland Post was introduced on 1 March 2016, and the postal vehicles were first out of the gate to flash the new look. On 14 March 2017, approx. one year later, one of the Post’s modern lorries appears in its new costume also in stamp format. The lorry on the stamp is a Scania G450 LB6X2 that fulfils EU emission standards according to Euro 6 requirements.

Two of the four business areas of the Post – Postal services, Stamps, Logistics and Pack & Distribution – have been pushing for a new profile of the Post. The two latter divisions are central to as well as growing areas of Åland Post’s enterprise. Today, the Post serves a great number of e-business companies, the products of which are warehoused, packed and distributed from Åland to other parts of Europe. The Post’s 19 Scania and Volvo lorries travel to Sweden and Finland five days a week carrying parcels and pallet goods. Some of the Post’s lorries are also equipped for refrigerated transports.

Issued in the form of a mini-sheet of 8 stamps, the pattern of the frame is inspired by the Post’s new profile. Create your own stamps with the new frame by choosing My Stamps in Åland Post’s web shop at www.alandstamps.com. The stamp issue is completed by a maximum card. 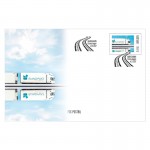 To order new stamps, visit our webshop at www.posten.ax/webshop/en