Guernsey Post will release stamps to celebrate the reformation of No 201 Squadron, which will be back in action from 2021 flying the new P-8 anti- submarine warfare (ASW) aircraft (stamp issue date – 3 April 2018).

The Squadron, known as ‘Guernsey’s Own’, dates back to 1914 when it formed as No 1 Squadron, Royal Naval Service in 1914, before becoming 201 Squadron when the RAF was established in 1918. 201 Squadron had a distinguished record flying fighter and reconnaissance aircraft before it was formally disbanded in 2011 following the Government’s Strategic Defence and Security Review.

201 Squadron specialised in maritime reconnaissance, part of which involved Search and Rescue operations as undertaken by the Nimrod MR2P (46p stamp) and flown by the Squadron from its base at RAF Kinloss. The Squadron had been preparing to fly the Nimrod MRA4, the MR2’s replacement, before the new aircraft was cancelled.

In 1940 the Squadron operated the Short Sunderland flying boat, which made a major contribution to the Allied war effort protecting convoys crossing the Atlantic and sinking a total of 5 U-boats between 1943 and 1944, including the U-440 (62p stamp).

After the Great War, the Squadron disbanded before reforming a decade later when it was stationed at Calshot. 201’s formal affiliation with Guernsey was officially inaugurated on 26th May 1939 when Wing Commander Cahill, the CO, accompanied Flight Lieutenant Kendrick’s crew on a visit to the Island in a London Flying Boat (63p stamp).

Major William Barker of 201 Squadron was awarded the Victoria Cross after his audacious attack on four German aircraft during a solo patrol in his Snipe aircraft on 27th October 1918 (76p stamp). First Barker brought down a two-seater over Fôret de Mormal, close to the French Belgian border, and, despite being seriously wounded and surrounded by Fokker aircraft attacking from all directions, he shot two of them down.

After losing consciousness and control of his aircraft he came round to find himself under attack from a large formation of enemy aircraft. He charged at one, driving it down but suffered a shattered elbow. Coming round after fainting again, he found himself under yet another attack and, by this time, he was severely wounded in both legs and left arm. Nonetheless, he dived on one of the aircraft managing to shoot it down. He went on to break up another formation before crash landing.

201 Squadron was involved in trench strafing – to fly low over enemy lines to carry out ground attacks  – during the Great War, as depicted on the 85 pence stamp.

Completing the stamp set is the 94 pence stamp, which features Flight Sub-Lieutenant Warneford flying a Moraine Saulnier monoplane over Bruges where he spotted German Zeppelin LZ37. He cut his engine and launched six bombs at the enemy aircraft, destroying it. The blast turned his aircraft upside down and out of control, leaving no option but to land behind enemy lines. He made it back to base after repairing his aircraft and was subsequently awarded the Victoria Cross.

“201 Squadron’s Association is delighted ‘Guernsey’s Own’ will reform in 2021 operating the Poseidon aircraft. Equally, this is excellent news for the Island and offers us the opportunity to re-kindle the unique and very special relationship we have previously enjoyed with “our” Squadron. Guernsey’s historical affiliation with this excellent front-line Squadron always provided a sense of great pride to the crews during their day to day operations and more so when deployed on combat operations. I am confident the same will be true for the new crews when they reform in 2021 and I welcome the issue by Guernsey Post of the 201 Squadron stamps as a wonderful and lasting reminder of the enduring and close relationship between Guernsey and 201 Squadron.”

Bridget Yabsley, head of philatelic at Guernsey Post, added: – “We are absolutely delighted not only to celebrate the reformation of 201 Squadron with our stamps, but also that their release coincides with the Centenary year of the Royal Air Force – RAF100.” 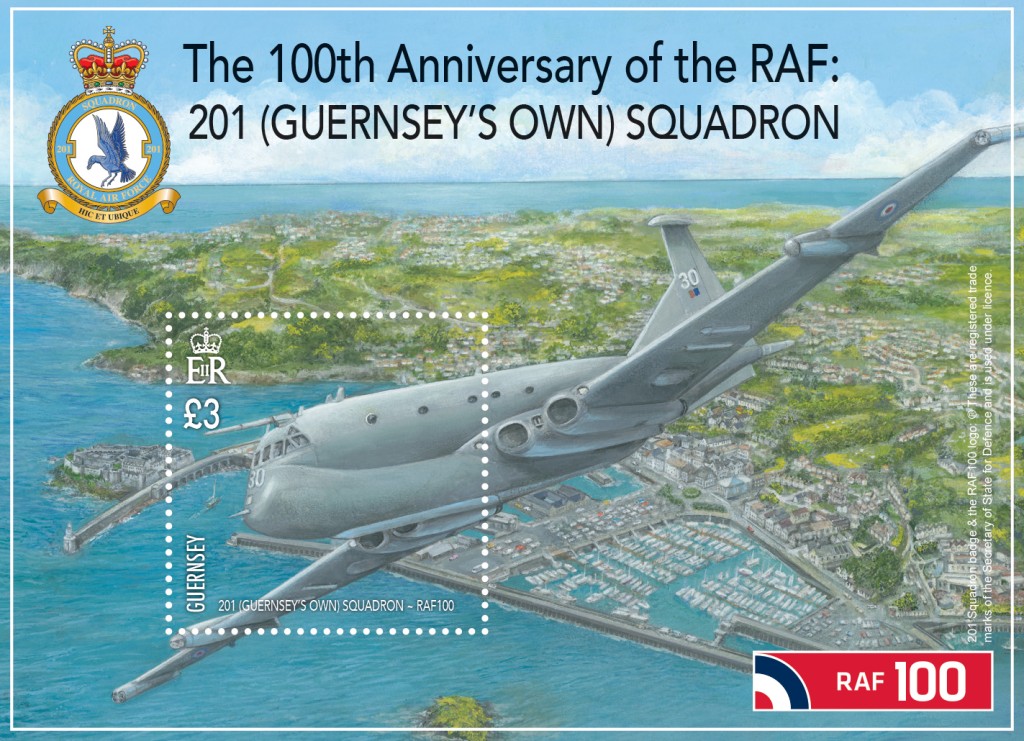