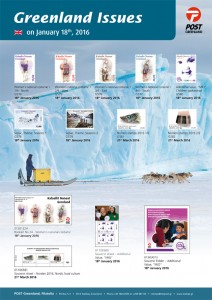 The issue includes seven stamps, one souvenir sheet, one stamp booklet and one souvenir folder. The stamps will also be issued affixed to First Day Covers. Our unique culture, nature and humanity are the focus.

This year’s SEPAC stamp will be released within a series under the theme of ‘Seasons’. The two stamps of the series will also be issued in normal sheets.

The 2016 additional value stamp, designed by Julie Hardenberg, is being issued for the benefit of children in the organization ‘MIO’ which stands for ‘Meeqqat Inuusuttullu Oqaloqatigiinnittarfiat’. ‘MIO’ works to strengthen children’s rights in Greenland. The stamp will be released in normal sheets, souvenir sheets and also in an attractive souvenir folder.

On our website www.stamps.gl/en/news the stamp image files can be downloaded.