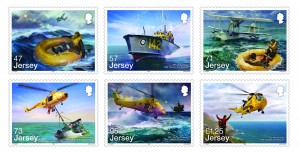 A new stamp issue commemorating the 75th anniversary of the RAF Search and Rescue Force will be released by Jersey Post on 6 February. The six stamps and Souvenir Sheetlet feature dramatic search and rescue scenes created by illustrator, Sharif Tarabay.

“In 1940, during The Battle of Britain, the British found that they were unprepared for a battle over the sea,” explains Chris Elligott, Philatelic Production Coordinator at Jersey Post. “It was clear that a better equipped and dedicated service was needed to recover airmen who had ditched or parachuted into the water and return them to their squadrons. As a result, the Air Ministry formed the Directorate of Air Sea Rescue to coordinate rescue efforts.”

The Air Sea Rescue Service was officially founded in February 1941 and adopted the motto, ‘The sea shall not have them.’ The six stamps in this issue depict specialised search and rescue vessels: a Lockheed Hudson aircraft responding to a distress flare, an air sea rescue high speed launch, a Supermarine Walrus seaplane rescuing two pilots in a dinghy, a Westland Whirlwind helicopter carrying out a winch rescue from a sinking boat, a Westland Wessex helicopter flying above a stormy sea and a Westland Sea King helicopter about to carry out a cliff rescue. 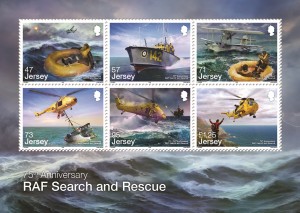 “Over the years, RAF Search and Rescue has provided a vital service, both in a military context and for civilians who have found themselves in emergency situations,” continues Mr Elligott. “We’re very happy to be able to commemorate such a significant anniversary with this set of stamps.”

Jersey Post’s RAF Search and Rescue stamps have been printed by Lowe Martin in Canada and will be available to buy from all branches of Jersey Post from 6 February 2016. Philatelic stamp products such as sets of stamps, Souvenir Sheetlets, First Day Covers and Presentation Packs will be available from the Jersey post offices at Broad Street, St Helier and Rue Des Pres, St Saviour on issue day and can be ordered now at: www.jerseystamps.com or by phoning the Jersey Philatelic Bureau on: 00 44 (0)1534 516320.