The Year of the Rooster is celebrated on Jersey stamps 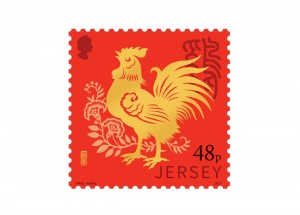 The Year of the Rooster is the subject of Jersey Post’s first stamp issue of 2017, to be released on 5 January. Illustrated by Wang Huming in Beijing, China, the issue comprises a single stamp and a Miniature Sheet and forms the second part in Jersey Post’s series celebrating the Lunar New Year.

Wang Huming, who also created the designs for Jersey Post’s 2016 Lunar New Year issue, Year of the Monkey, is the Deputy Chief Designer of the Postage Stamp Printing Bureau of China Post and has been continuously elected as the most loved stamp designer by Chinese collectors.

Also known as the Spring Festival, the Lunar New Year is the most important celebration in the Chinese calendar. “The Chinese animal zodiac is a repeating cycle of twelve years,” explains Melanie Gouzinis, Head of Philatelic at Jersey Post. “Each of the twelve years is represented by an animal and 2017 is the year of the rooster.”

In Chinese, the pronunciation of rooster (ji) is the same as lucky (ji) so the rooster is viewed as a symbol of luck. As the rooster heralds daybreak every morning, it is also considered to be a sign of diligence, honesty, blessing, and brightness and people regard it with fondness. The flower shown with the Rooster on the 48p stamp is cockscomb celosia cristata which was named due to its similarity with the shape of the crest of the rooster and the Chinese symbol on the stamp is YOUJI, meaning Year of the Rooster.

Melanie continues: “The artist, Wang Huming, explained to me that in the Year of the Rooster the hen and chicks are also of great importance and the Miniature Sheet design, with the rooster in the background, symbolises family union. The flower that you can see is that of a peach and is a symbol of spring.” 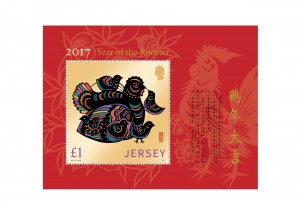 Jersey Post’s Year of the Rooster stamps will be available to buy from all branches of Jersey Post from 5 January 2017. Philatelic stamp products such as Miniature Sheets, First Day Covers and Presentation Packs will be available from the Jersey post offices at Broad Street, St Helier and Rue Des Pres, St Saviour on issue day and can be ordered now at www.jerseystamps.com or by telephoning the Jersey Philatelic Bureau on: 00 44 (0)1534 516320.