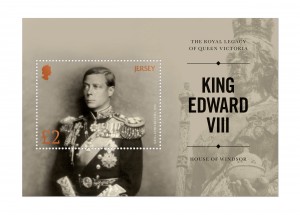 Edward VIII, Queen Victoria’s great grandson, reigned as King of the United Kingdom and the Dominions of the British Empire, and Emperor of India from 20 January 1936 to 11 December of the same year. The King’s natural charm, good war record and care for the underprivileged, made him popular with the British people and among his many achievements was becoming the first British monarch to qualify as a pilot.

King Edward VIII’s reign ended on 11 December 1936 when he abdicated the throne to marry Wallis Simpson, an American divorcee. As King, Edward VIII was head of the Church of England and at the time, the Church did not permit the re-marriage of divorcees with living ex-spouses.

“The history of the British Royal family is a subject which continues to fascinate people,” observes Rachel MacKenzie, Philatelic Marketing Manager at Jersey Post. “Queen Victoria, often known as the ‘grandmother of Europe’ left a great and lasting legacy, one which we continue to explore through this stamp series.

Jersey Post’s King Edward VIII Miniature Sheet will be available to buy from all branches of Jersey Post from 20 January 2017. Philatelic stamp products such as First Day Covers and Presentation Packs will be available from the Jersey post offices at Broad Street, St Helier and Rue Des Pres, St Saviour on issue day and can be ordered now at www.jerseystamps.com or by telephoning the Jersey Philatelic Bureau on: 00 44 (0)1534 516320.