Bicentenaries of the National Library of Iceland and writer Jón Thoroddsen

On February 15th, Iceland Post will release two new stamps, both relating to literature in their own way.

Its role is to collect, preserve and register all Icelandic publications and documents. Over the years, the library moved to several locations including the then newly erected facilities of Althing (the Icelandic Parliament) in 1881, and Safnahúsið on Hverfisgata in 1906. 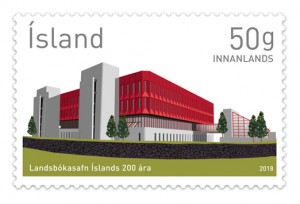 659A – The National Library of Iceland 200th Anniversary

The building is a massive 13,000 sqm red and white building situated across the road from the University of Iceland and the National Museum of Iceland. Þjóðarbókhlaðan houses both the National and University libraries and was opened to the public on December 1, 1994, which coincided with the 50th anniversary of the Republic of Icelandic.
Þjóðarbókhlaðan is the main legal deposit library in Iceland ; the library has a manuscript collection of around 15,000 items, from vellum manuscripts dating back to year 1100 to modern manuscripts. The library collaborates with a number of other cultural institutes and since 1996 has engaged in several large digitalisation projects providing the public with open access to unique resources such as manuscripts or antique maps.

2018 marks 200 years from the birth of Icelandic writer Jón Thoroddsen, featured in issue 660A. 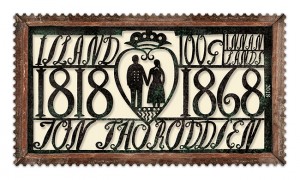 Jón Thoroddsen (1818 –1868) was a county magistrate and a writer, famous for writing the first modern Icelandic novel. (“Piltur og stúlka” aka “A Boy and a Girl”). Jón was born at Reykhólar in the northwest of Iceland. After studying Law at the University of Copenhagen, he became the magistrate of the district of Barðaströnd in the Westfjords of Iceland.
Although he associated with influential people like Jón Sigurðsson (the leader of the 19th century Icelandic independence movement) or Icelandic poet Jónas Hallgrímsson, Jón did not have as much of an impact on the social and political lives of his contemporaries.

In 1848-1850 he wrote “A Boy and a Girl”, a story of young people in love. The supporting characters such as the gossipmonger Gróa from Leiti and the penny-pincher Bárður from Búrfell were beloved by the Icelandic audience. The novel was influenced by the works of modern writers like Charles Dickens and Walter Scott.
In 1862, Jón became a magistrate in the county of Borgarfjörður. From 1865 he started working on a new novel, “A Man and a Woman”. Jón died in before the novel was finished. It was later published in 1876, eight years after the author’s death.
Both his novels are romantic love stories set in the Icelandic countryside.

Issues 659A and 660A will be released on February 15th, along with issue 661AB and the Icelandic sovereignty issues 657AB and 658A

All philatelic products including stamps and first day covers are available now from our webshop
You can also contact our office directly at +354-580-1050 from 9-16.00 Icelandic time

They will also be available to buy from all branches of Iceland Post from 15 February 2018.

We also have a Facebook page! 🙂 Follow us and discover new facts about Iceland, Icelandic stamps and philatelic products!