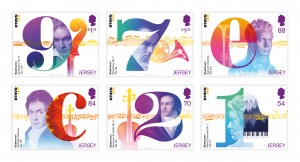 The 250th birth anniversary of Ludwig van Beethoven will be celebrated with a set of six stamps and a Miniature Sheet issued by Jersey Post on 26 March 2020. A prominent figure in the transitional period between the classical and romantic musical eras, Beethoven is remembered as one of the greatest composers of classical music ever to have lived.

Created by Hat-Trick Design, the stamps have been designed around some of Beethoven’s most famous compositions, with each design incorporating a portrait of the composer, a letter or number signifying the name of the musical piece, an excerpt from the musical score and a key musical instrument from the piece. The BTHVN logo, which appears in the top left of each stamp, was created by the Beethoven Anniversary Society, an affiliate of Beethoven-Haus Bonn, and will feature on stamps worldwide as part of the anniversary celebrations.

“We were really excited about this project from the start,” comments Gareth Howat, Creative Director at Hat-Trick Design. “Working with the Beethoven-Haus Bonn, which houses the world’s most significant Beethoven collection was great as they have an amazing archive of images and musical texts. Beethoven is often viewed as a revolutionary artist, so this was an opportunity for us to have a more contemporary take on his influence. The brief was to use portraits from the archive, but we were keen to break away from the way they have been used in the past and produce something fresh. We wanted the designs to make use of really vivid colours to reflect the richness of the music, and the stamps were printed using a six colour hexachrome process to add real punch.” 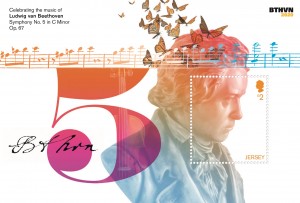 In addition to the stamps and Miniature Sheet, Jersey Post will be issuing 250 limited edition souvenir coins featuring an iconic portrait of Beethoven on one side and Beethoven’s beloved Broadwood piano on the other. The portrait, by Joseph Karl Stieler, shows Beethoven working on the manuscript for Missa solemnis, widely regarded as one of the composer’s greatest achievements. 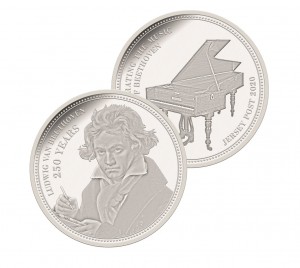 Jersey Post will also be issuing 200 limited edition 12” transparent vinyl records featuring a selection of Beethoven’s compositions. The record features a beautiful gatefold cover designed in the style of the stamps and containing a set of stamps and a Miniature Sheet. 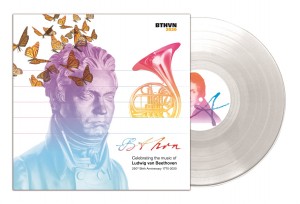 Born in Bonn in Germany in 1770, Beethoven was taught to play the clavier and violin from a very young age by his father who was a singer. Beethoven moved to Vienna in Austria in his early twenties where he lived for the rest of his life. His influence continues to be felt around the world today, including in Jersey where the Jersey Symphony Orchestra has performed a number of his works over the years.

Jersey Post’s Beethoven stamps will be available to buy from all branches of Jersey Post from 26 March 2020, whilst philatelic stamp products such as Miniature Sheets, First Day Covers and Presentation Packs will be available from the Jersey post offices at Broad Street, St Helier and Rue Des Pres, St Saviour on issue day. All items can be ordered now at www.jerseystamps.com or by telephoning the Jersey Philatelic Bureau on: 00 44 (0)1534 616717.