Post Luxembourg will issue a new series of stamps on March 10th 2020.

A special stamp will celebrate the 100 years of “Natur & Ëmwelt”, the biggest environment protection organization of Luxembourg. The “Lëtzebuerger Natur a Vulleschutzliga a.s.b.l.” (Bird protection society) was founded with the goal of introducing legislation in Luxembourg for the protection of nature and birds, which was achieved in 1928.

The initial Bird Protection Act is still the legal basis for this field today .The stamp illustrates the Goldcrest, the symbol of Luxembourg’s bird protection society.

A special series , consisting of three stamps, is dedicated to a number of rare birds : the Skylark, the House Sparrow and the Robin.

Furthermore, another special stamp will illustrate the Fortress and Old Town of Luxembourg City to celebrate the 25th anniversary of it being part of the UNESCO World Heritage.

The 175th birthday of Gabriel Lippmann will be commemorated by a special stamp. Born in Luxembourg on 16 August 1845, he received the Nobel Prize in Physics in 1908 for the Lippmann process of colour photography.

Last but not least , the United Nations General Assembly has declared 2020 as the “International Year of Plant Health”. On behalf to this topic, Post Luxembourg is releasing a special stamp to contribute to raise awareness to the importance of these sustainable development goals.

In 1920, the Lëtzebuerger Natur a Vulleschutzliga a.s.b.l. (Luxembourg Nature and Bird Protection Society) was founded with the aim of introducing legislation in Luxembourg for the protection of nature and birds. The goal was achieved in 1928. The initial Bird Protection Act is still the legal basis for this field today.

In 2012, Lëtzebuerger Natur a Vulleschutzliga a.s.b.l. merged with Haus vun der Natur a.s.b.l., NATURA a.s.b.l. and natur&ëmwelt a.s.b.l. to form natur&ëmwelt a.s.b.l. (natur&environment association). The aim was to join forces so as to be more broadly active for the protection of nature and in particular biodiversity. The organisation now has 11,000 members and works with 40 partner associations to provide information,raise awareness and engage politically. There are also numerous and varied opportunities for big and small nature lovers to discover and preserve valuable habitats.

As the smallest representative of the native bird world, the goldcrest is the symbol of Luxembourg’s bird protection. It lives in coniferous forests, especially in spruce forests. It is easily recognised by its rounded body and the striking yellow feathers on its head. This small, very lively songbird can also fly on the spot in search of insects. 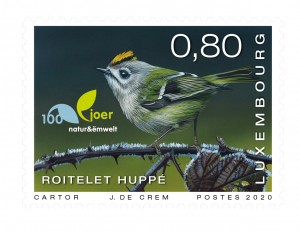 POST Luxembourg is rounding off the special series by issuing these three motifs:

Skylarks live in fields, meadows and pastures, in open landscapes. As ground breeders, they build their nests hidden in hollows. When rearing their young, they prefer insects, worms and larvae, while in winter, they feed mainly on plants.

These birds display a high level of social behaviour and breed several times a year, preferably as a colony. They do not shy away from human presence, and they like to visit feeding houses set up in the garden, using bird baths for drinking and bathing several times a day.

The agile robin is an early riser, but you can hear his singing until late in the evening. With its striking orange-red throat plumage, it can be seen mainly in hedges and bushes. As for food, robins look for beetles, spiders, worms, snails and larvae.

In 1972, the “Convention Concerning the Protection of the World Cultural and Natural Heritage” established the criteria for the inscription of sites on the UNESCO World Heritage List and is applied accordingly by the World Heritage Committee to assess the outstanding universal value of a candidate site.

Of the six criteria for World Heritage sites, the fourth is particularly relevant for Luxembourg City, where a large protected area with a core zone of 29.94 hectares has been on the list since 17 December 1994: The site “is an outstanding example of a type of building, architectural, or technological ensemble or landscape which illustrates a significant stage in human history”. Looking at the history of the city, the influence of the fortress on the daily life and work of its inhabitants over the years is omnipresent. Added to this is the special, very impressive scenic character of the site.

On the occasion of the 25th anniversary, the National Commission for Cooperation with UNESCO put together a series of interesting events running from 17.12.2019 to 17.12.2020. 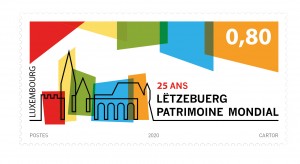 Jonas Ferdinand Gabriel Lippmann, born in Luxembourg on 16 August 1845 to French parents, received the Nobel Prize in Physics in 1908 for the Lippmann process of colour photography, which was named after him.

The process is characterized by the outstanding quality and improved durability of the prints. The Musée de l’Elysée in Lausanne still houses 130 colour photographs taken between 1891 and 1899. Lippmann worked for 12 years developing his technique. After its presentation in Paris, however, it took another 17 years before he received the Nobel Prize for this unique work.

Although the Lippmann method did not prevail, Gabriel Lippmann was undisputedly one of the most important physicists in his time. In 1872 he developed the capillary electrometer and in 1875 he provided important findings in the field of electrowetting, which brought him great international recognition in the field of microfluidics.

Gabriel Lippmann died on 13 July 1921 on an Atlantic crossing from New York to Le Havre. 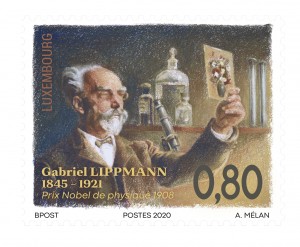 This involves implementing measures to control plant diseases and pests in order to prevent them from spreading to new areas. Plants are an existential element for life on earth. The initiative aims to underline the importance of plant health for food security, the supply of raw materials, biodiversity and the various services provided by agriculture, forestry, water management and other ecosystems on Earth.

The Administration of the Technical Services for Agriculture of the Ministry of Agriculture, Viticulture and Rural Development implements the phytosanitary measures in Luxembourg. In concrete terms, import controls are first carried out at the airport, i.e. goods such as flowers, fruit or seeds are checked for new foreign pests on arrival in the country in order to prevent them from spreading further. Secondly, traps are permanently operated and analysed to detect, identify and control non-native pests.

In addressing this topic, the United Nations is making an important contribution to raising awareness in a globalised world in which the implementation of sustainable development goals is becoming increasingly important.