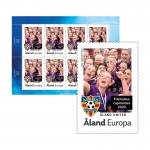 On 9 October, Åland Post issued a stamp to honor football team Åland United who has won its first gold in the Finnish Women’s Cup. The stamp is a limited edition special issue and will be available to buy in the Post’s web shop on the day of issue.

The football team Åland United won the final of the Finnish Women’s Cup arranged in Myyrmäki on 4 October, defeating TiPS 2–1. Åland Post wishes to celebrate this historic achievement and has produced a special stamp on short notice. The stamp will be for sale as of 9 October.

This is Åland United’s first Cup title. The team has previously won two gold medals in the National League and, even this year, the team is playing for the gold.

The stamp is based on a photo by Juha Tamminen, who has worked as a football photographer for almost 40 years. Juha explains: “I shot the photo immediately after the cup final in Myyrmäki, in the midst of the triumph of victory. I saw the players huddling together for a group photo with one of the players’ mobiles, having thanked their supporters and shot the team photo. They were very spontaneous, relaxed and happy, so, I decided to go up close to shoot photos. I think this is one of the best celebration photos I have ever shot; you can see they have a strong team spirit. Taking individual selfies with the cup may be the new normal but, in this shot, the players teamed up, presenting their medals, biting their medals and rejoicing together.”

The limited edition of the issue is 1000 sheets of 8 stamps, and a minimum order consists of one mini-sheet at €18.00, easily ordered in Åland Post’s web shop . The denomination of the stamp ‘Europa’ is valid as postage for 20-gram letters to destinations in Europe and the Nordic countries.

The stamp is produced using the Åland Post’s online service My Stamps, giving private persons and companies the possibility to choose their own stamp motif. Åland Post has previously issued customized stamps to celebrate football team IFK Mariehamn’s Finnish Cup gold (2015) and Championship gold (2016). NOTE: This is a special issue that is not included in the official stamp issuing program of Åland Post.