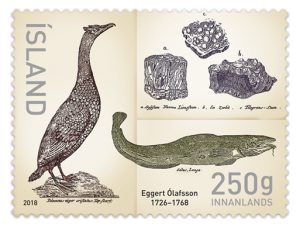 Eggert Ólafsson (December 1, 1726 – May 30, 1768) was a poet, a writer and naturalist from Svefneyjar islands in the northwest of Iceland. He studied natural sciences, classics, grammar, law and agriculture at the University of Copenhagen and was one of the first advocates of the Enlightenment in Iceland. He was also a conservator of the Icelandic language and worked to revive the Icelandic culture.

Between 1752 and 1757, he and his friend and fellow naturalist Bjarni Pálsson (who later became Iceland’s Director of Health) traveled all over Iceland, conducting a scientific and cultural survey and collecting practical information about the country and its men, with the purpose of improving living conditions and the general state of the country.

During this trip, they visited a great number of Icelandic natural sites and proposed geographical and infrastructural improvements to the regions they visited – they were for instance the first known people to climb Mount Hekla, a 1491m high volcano in south Iceland, which until then held the sulfurous reputation of being the entrance to hell! Thanks to them, fortunately Icelanders found out that was not the case….  🙂

The account of their trip was later published in the book Travels in Iceland which is a fundamental work on Iceland and its people.
Eggert wrote on a wide range of topics and was also a devout patriot. A staunch nationalist, he used his literary works to convey his ideas and stir up patriotism within his countrymen. His poems, particularly, burn with with patriotic fervour.

In 1768, Eggert and his wife, Ingibjörg Halldórsdóttir were sailing back home from their winter dwelling in Sauðlauksdalur when their boat capsized in Breiðafjörður and the couple drowned. Eggert was deeply mourned by Icelanders – the famous poet and playwright Matthías Jochumsson wrote a commemorative poem entitled “Eggert Ólafsson” in his honour. Icelandic romantic poet Jónas Hallgrímsson also wrote a poem for Eggert – it bears the name “Hulduljóð”.

The death of Eggert Ólafsson. Copper engraving by I. Haas, published in 1769, the year after Eggert’s death.

As proven by this stamp issue, 250 years after his death, Eggert Ólafsson and his legacy still hold an important place in Iceland’s cultural heritage.