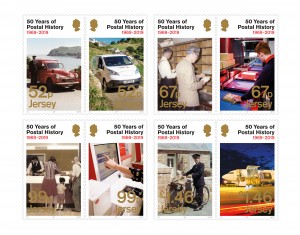 To celebrate 50 years of postal independence, Jersey Post will issue a set of eight commemorative stamps and a prestige booklet on 1st October 2019. Designed by local agency, TPA, the eight stamps illustrate the growth and change that has happened within Jersey Post over the last fifty years.

In 1969, the British Post Office became a Corporation and the States of Jersey took the opportunity to gain postal independence from Britain. With a short, simple ceremony at the head Post Office, The Head Postmaster at the time, Mr Leslie Cockbill, on behalf of The British Post Office, formally handed over to the new Director of Jersey Postal Administration with the shaking of hands. At the time of its formation, Jersey Post was fundamentally a postal operator delivering traditional mail products to its customers. Today, it is a global logistics business for which delivering mail is only one of a number of services offered.

Phil Regan, Creative Director at TPA comments: “It’s always a privilege being asked to design a set of stamps. For Jersey Post’s 50th anniversary, we were tasked with creating a se-tenant issue. Given how much of Jersey Post’s history we were trying to convey, this gave us the opportunity to showcase ‘then’ and ‘now’ using selected images from a vast library of material. Much research time was spent narrowing down these choices but eventually we had perfect combinations to demonstrate four key aspects of Jersey Post; delivery vehicles, the sorting room, customers and automation, and finally, the transformation of a local delivery service to a global logistics network. Ultimately, this was an incredibly satisfying issue to work on and we’re delighted with the results.”

In addition to the eight commemorative stamps, which have been finished with a gold hot foil, a prestige stamp booklet featuring additional imagery and information has been produced to mark Jersey Post’s golden anniversary. 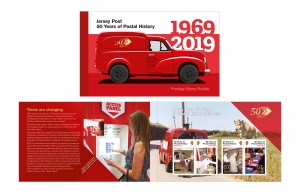 Jersey Post’s 50 Years of Jersey Postal History stamps will be available to buy from all branches of Jersey Post from 1 October 2019. Philatelic stamp products such as First Day Covers, Presentation Packs and Prestige Booklets will be available from the Jersey post offices at Broad Street, St Helier and Rue Des Pres, St Saviour on issue day and can be ordered now at www.jerseystamps.com Alternatively, you can email the Jersey Philatelic Bureau at stamps@jerseypost.com or telephone us on: +44(0) 1534 616717.