Post Luxembourg traditionally issues at the end of the year a series of 6 stamps with surcharge. All the money collected by the surcharge goes to charity. Four of these stamps belong to a series started  in 2014 and which are dedicated to oldtimers one can see in summertime on the streets in the Luxembourg countryside driven by their proud owners. These cars are painted in the most realistic way by the Canadian artist Mark Heine who has specialized in this technique. The other stamps are the two Christmas stamps realized by Jacques Schneider, a talented young artist  born in France and living now in Luxembourg. Jacques Schneider has been most productive during 2015. Several exhibitions in Luxembourg and abroad, as well as a book release have made him well known to Luxembourgers. Jacques Schneider considers the stamps he has conceived in his very personal style as being part of the creative process through which he went during the last 12 months. The year program ends in beauty with the issuing of 4 stamps showing flowers that grow along country roads. These flowers enrich Luxembourg’s countryside and contribute to its beauty and great  biodiversity.

Within the Christmas stamp series, POST Philately wished to confirm for 2015 its desire for innovation. Following the scented or velvet effect stamps, the 2015 Christmas stamps have been designed by the Luxembourger artist Jacques Schneider with an artistic effect that is both graphic and photographic. The stamps are based on photos of the City of Luxembourg taken by the artist from unique angles in black and white and reworked with blue and orange tones.

The choice of working with Jacques Schneider is part of POST Philately’s desire to become part of the artist’s aggregate work. He has already fascinated many with his work in colour and his use of perspective, his art often highlighted by this original technique that he himself calls “Kritzel.” The pop-up bar for the Hôtel Royal is a perfect example of it.

He succeeds at rendering in light and colour the subjects that impress him beyond measure. He acknowledges a great admiration for beautiful things, the unusual, and particularly for his country, Luxembourg. He is lovingly fond of its villages and landscapes and professes a great love for the grand ducal family whom he reveres, as it transpires from his innumerable artistic works where the latter is the principal subject.

From Luxembourg to Tokyo and passing through Strasbourg and Istanbul, Jacques Schneider, indefatigable worshiper of beautiful things, creates, exposes, fascinates… and he has not yet finished fascinating us. We await with impatience his new creations.

Following the series launched in 2014 on the automobiles of yesteryear, you will discover within this edition 4 other models of antique automobiles registered in Luxembourg and circulating throughout Europe for the purpose of participating in events highlighting them. This series is produced in collaboration with the «Veteran and Vintage Car Club of Luxembourg (asbl).»

The “Novelty of Philos SA Automobiles” was created in 1912 in Lyon. The name “Philos” has its origins in ancient Greek and means “friend/beloved.” Known as good touring cars, Philos were used by the French army during World War I as liaison vehicles.

In 1923, hardly 11 years after its creation, the company ceased activity with the purchase of the company by Jean Gras, who continued nonetheless to build automobiles under his own name until 1930.

W.R. Morris, who was later called Lord Nuffield, was a bicycle agent in Oxford, England. He founded the company “W.R.M. Motors Limited” in October 1912. The production of his first automobile only commenced in 1913. The automobile presented under this heading is an ‘Oxford Bullnose,” named so because of its characteristic rounded radiator. This model, constructed principally as a two-seater convertible, also existed in the limousine class and sports coach class, which, like the van, did not have a windshield but did have a speedometer. In all, 1,475 automobiles of this type were built between 1913 and 1915.

Delaunay-Belleville was a luxury French automobile brand created in 1904 by two brothers, Pierre and Robert Delaunay Belleville. This company located in Saint Denis and known for the manufacturing of locomotives and ship boilers, built very high-end vehicles.

In 1904, a new automobile that was both sublime and fairly expensive was presented at the Paris Salon. It was designed by Marius Barbarou, who had worked before for Benz. In 1905, the product range was already composed of 3 different models with 4 cylinder motors possessing 16, 24, and 40 horsepower.

Up until 1914, the Delaunay-Belleville was the so-called best automobile in the world and was above all valued for its silent motor and discreet elegance.

Marius Berliet was born in 1866 within the Croix Rousse industrial quarter of Lyon. At the age of 15 with his certificate of study in hand, he joined the family workshop, all the while pursuing an evening course in mechanics. He built his first single cylinder engine in 1894 and his first automobile in 1895.

During World War I, Berliet as well as other French engineers built trucks such as the CBA, the truck which was to become emblematic of the “Voie Sacrée”, 25,000 models being ordered by the French army. 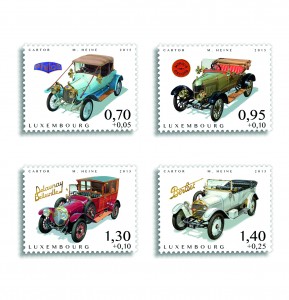 For the end of the year, POST Philately will publish 4 new ATR stamps.

These reduced price stamps, intended as postage for non-profit organizations, present pictures of 4 wild flowers that grow predominantly but not exclusively in fields and thus are less exposed to the chemical fertilizers spread over agricultural lands. This is why their survival is a struggle, but who knows how much longer they will manage to survive. It is up to us to protect them!

These flowers are the Feierblumm (Red Poppy), a flower that grows in Europe at the beginning of the month of April, typically on freshly ploughed land, that is distinguished by its intense red colour, the Karblumm (Cornflower) is most often found in grain fields and is becoming increasingly rare, the Maargréitchen (Daisy), a clump flower with petiole basal leaves and sheathed dentate stems, and the Dëschtel (Thistle), a plant bearing prickly leaves or thorns and found on arid lands.

These flowers or plants enrich Luxembourg’s countryside and contribute to its beauty and great biodiversity. Preserving these precious flowers is part, for all of us, of protecting the environment responsibly.